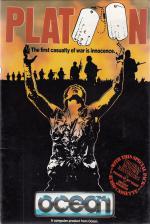 Forget that old saying, 'War is Hell'... War is actually a computer program, and as anybody who has ever forked out for a 'game-of-the-film' knows - the first casualty of licensing deals is innocence!

How many times has the poor, naive punter, wandering into the quartermaster's software store, volunteered for the big one, the blockbuster tie-in, only to discover that when he starts active manoeuvres with his Spectrum, the game bears absolutely no resemblance to the movie?

So here we are back in Big Muddy - I really must get the landlord to see to that drain - tackling the first and possibly best of Hollywood's encounters with the jungles and paddy fields of South East Asia - though how those Irishmen got there I'll never know.

Yes, Platoon (the game) turns you into just the sort of killing machine that Platoon (the movie) made you so queasy about. Not literally, of course - I refuse to accept that machine code corrupts - but by reducing the agony of Asia into an exercise in run and shoot, the game ignores the real meat of the story.

But enough of the moralising, because some of you won't give a rubber grenade for anything other than how well it plays. Well, even you blinkered hedonists are likely to be disappointed. Sticking closely to the basic plot, the program breaks down into six sections, requiring multi-load on 48K machines.

You kick off in the jungle, a maze of paths rather like Hampton Court with hostile attendants. Find the supply of explosives which has carelessly been lost, then make for the bridges and blow them up, shooting Charlie before he shoots you and watching out for trap door lairs.

Next it's into the village to search the huts for a torch and a map, but don't accept any offers of tea because the wily VC are hanging around to top you. Instead, it's into the tunnels for section three, a split screen extravaganza with underground map - but before you take the Bakerloo line, look out for more of those subterranean guerillas.

If you've maintained a high enough body count, you can now bunk off to the bunker. As the enemy attacks you'll need all your flair to launch flares and illuminate the landscape before blasting away. Don't dare miss though, because the return fire is lethal every time.

Morning, and more jungle as you get the two minute warning of a warm welcome - your chums in the USAF are about to napalm your surroundings. This is another case of choose the right route and run like mad, avoiding every possible peril so that you can reach section six - The (Samantha) Foxhole - Oo-err!

Here you'll encounter that sly fox Sergeant Barnes, foxing around and hurling everything that he's got at you. Instead of thanking him for his generosity, you have to lob five grenades into his hidey-hole, after which you're 'it' - and he's a pile of raspberry jam!

Long and involved, yes, but satisfactory - not really. Platoon depends on that old stand-by of linking together a number of standard games, from mazes to shoot 'em ups, to produce a superior sort of Beach Head. But the whole doesn't add up to the parts.

Sure it's tough, owing in part to the fact that it's not always clear what's going on. General Gwyn Hughes put this down to limited jungle visibility and surprise attacks, which were major elements in Vietnam, but I prefer the attribute clash-theory! On this showing though, War is Dull as well as Hell.

Competent is the word I'd use for Platoon, followed closely by disappointing. A bit more imagination and attention to what the film was really about, may have made it great. As it is, only die-hard hawks need enrol. I'm burning my draft card.

Big but disappointing adaption of the Vietnam movie - a war that nobody can win - including the Spectrum owner.

Competent is the word I'd use for Platoon, followed closely by disappointing. A bit more imagination and attention to what the film was really about may have made it great.