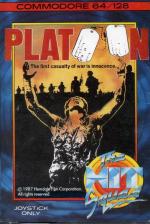 A cover game back in early 1988 the Sizzler game of the Oliver Stone film enters the budget jungle to 'pacify' the opposition. Split into six stages the game follows the progress of a US platoon through the Vietnam jungle, searching for explosives and a village, investigating a VC tunnel network, fighting off swarms of VC at night, racing through the jungle before it gets napalmed, and facing a final conflict with the mad Sergeant Barnes.

One of the trickier films to convert, Platoon stands out from the normal Rambo-esque games due to its attempt at bringing out the morality and futility of the Vietnam war. As such, it's a gritty, well presented, highly atmospheric combat compilation of strong mini-games. Each mini-game is a very strong, playable challenge with separate, well crafted soundtracks for each load and excellent use made of downbeat, jungle colours. All this creates a superb mood to the game and ranks as one of the most polished and slickly produced movie tie-ins yet. Platoon was a great value for money package at full price, at £3 now it really is an essential purchase.