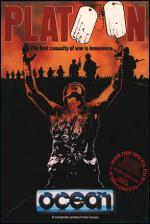 Based heavily on the Academy award-winning Oliver Stone movie, Platoon follows the fortunes of five naive young Americans as they battle to survive the Vietnam war. The action is split into four sections, each representing a different chapter of the story.

First is a journey into the depths of the Vietnamese jungle, where the detail attempt to find a village where Viet Cong guerrillas are based.

The jungle pathways are treacherous: booby traps lie in wait for the helpless GIs, and the troops are constantly under the threat of ambush from VC assassins.

A box of explosives has to be found in order to blow up the bridge over which the platoon must cross. Failure to do so allows a large VC band to follow the platoon and wipe them out.

Once in the village, a search of the surrounding huts leads them to the discovery of a torch, map and trapdoor which leads to the secret underground VC tunnel system - which signals the second stage, which loads separately.

Deep in the tunnel system, the platoon negotiate the dark labyrinth in order to find a compass and a box of flares, vital for completion of the next section.

The tunnels are densely populated with VC guerrillas who constantly appear from behind corners or out of the murky water, and are shot on sight to avoid further platoon casualties.

There are several rooms in the complex which hold caches of equipment. The boxes may be searched, but are frequently booby trapped.

Successfully finding the tunnel exit prompts the third chapter - the bunker. Here the platoon find themselves in a foxhole at night with a group of VCs after their blood.

Firing flares into the air highlights the surrounding terrain, and silhouettes the attacking guerrillas, who are shot before they manage to get a bead on your muzzle flashes and shoot back.

After the VCs are defeated, the platoon enters the final load, which is set in the jungle. Following a radio message, the weary grunts find that the area they're in is about to be Napalmed by their own troops, giving them just enough time to make it to safe ground. The solders have to run the gauntlet of VCs, booby traps and barbed wire to reach safety. There are several paths through the vegetation, some of which do not allow exit from the area, and thus prove fatal.

Finally, the remaining men, having made it to a supposed safe area, find the only available foxhole taken by Sergeant Barnes - the officer whom they blame for the death of their previous Sergeant. In an attempt to protect himself from their wrath, Barnes opens fire on them. With the air strike imminent, the platoon's only course of action is to grenade the hole and kill Barnes. Once the foxhole has sustained five grenade hits, the platoon may enter the foxhole to escape a fiery grave.

The packaging comes complete with a large film-style poster and an audio soundtrack of 'Tracks of My Tears' by Smokey Robinson - the film's theme tune.

Platoon is quite simply the best film tie-in to date. Nothing is overstated or gaudy, and as a result the atmosphere generated in each of the four levels is superb.

The deliberately sombre graphics in the tunnels are broken by the sudden appearance of a knife-wielding soldier, or a blood-hungry maniac pointing a rifle straight at you - fail to kill him, and a sticky blood-splurge oozes onto your viewing screen: brilliant!

There are as many puzzles to solve and objects to collect as any arcade adventurer could wish for, but you hardly have time to think, because most of the game is spent frantically blasting the enemy before he blasts you. This on its own would be more than enough, but you get a brilliant package as well.

Buy this, but make sure you have some weekends free.

Ocean have made a commendable effort in attempting to actually recreate the storyline of Platoon within a computer format, with the tunnel and bunker sections being particularly tense and atmospheric.

This is not to denigrate the other sections, however, since the whole game hangs together well and each of the four sections are worth playing individually.

The graphics throughout are extremely good, and the character animation ranges from OK to excellent, specifically, the tunnel section which is incredible.

The realism pervading the game just may well have certain factions up in arms, saying that the violence is too strongly depicted. I'd personally defend Platoon since it's one of the few games where you actually feel that you're fighting for your life, rather than the glory of it!

A brilliant release from Ocean. You can almost smell the fear...

I recently watched and thoroughly enjoyed Platoon, and was therefore very interested to see how Ocean's officially licensed computer game would turn out. Well, I'm glad to say that it's utterly brilliant.

The programmers have done a superb job, and have faithfully captured the film's atmosphere. The plot follows the film very closely, and I'm amazed at hom much of the story is replayed by the player.

The first section is a 100-screen arcade adventure, which is followed by a superb tunnel sequence. Next is the bunker sequence, and finally a desperate race through the forest to kill the renegade Sergeant Barnes.

Each section is both challenging and addictive, and the gameplay has been balanced perfectly so that the player progresses a little further with every game.

The graphics and sound effects are brilliant thoughout, and really convey the dark forest atmosphere so apparent throughout the film. Platoon is absolutely superb - a milestone in film tie-ins, and a yardstick by which others shall be judged.

Presentation 94%
Generally polished and user-friendly, but slightly marred by the unnecessary but intrusive multi-load. The packaging, complete with poster and audio tape, is superb.

Graphics 93%
Some sections outshine others, but the standard is very high throughout.

Sound 93%
Each load carries a different soundtrack, which are all atmospheric and suited to the action.

Hookability 88%
The first section requires mapping for completion, but the action is enticing enough to appeal to most.

Lastability 92%
The four sections should hold interest for some time, and the game is good enough to be worth playing to completion.

Overall 94%
A superb combat simulation, and simply the best film tie-in to date. Not to be missed.