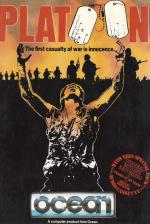 The average age of a combat soldier in Vietnam was nineteen. You control five such young men, members of a platoon deep in the heart of enemy territory. A gruelling ordeal lies before you as you try to fight through the six sections of the game.

In the first stage of the game, the jungle, you have a side on view of the currently selected soldier and his surroundings. You must travel the labyrinth-like paths of the jungle looking for some TNT left by a previous patrol. This is needed to blow a bridge at the end of the stage. Once you've got the explosives you then have to find the bridge, cross it and plant the TNT.

Of course the jungle is not deserted; there are many Viet Cong troops out there just waiting to kill you. They run along the jungle paths, drop from the trees and snipers hide in pits out of sight. There are also trip-wires across the path which set off grenades when you, or the enemy, hit them. Every time one of your platoon is hit, a menu appears that lets you choose which man you want to control next. You can also call up the menu at any time if you want to change men. A hit loses you some morale and running out of morale loses you the game.

After the bridge comes the Vietnamese village where you have to find a map, torch and trapdoor to take you to the third part of the game. All three are inside huts in the village. Not all of the huts are empty and some of the objects are booby-trapped to catch an unwary soldier off guard. Enemy troops still wander around, only this time there are villagers too. Don't shoot the villagers because you'll lose morale. This is only a short stage because there are only six huts to investigate and then it's on to the tunnel.

One by one the members of the platoon go down into the tunnel and attempt to find two boxes of flares and a compass. The tunnels are full of hostile troops. They appear either in the distance and walk towards you or they leap up from under the water in front of you. The ones that do appear from under the water are difficult to kill because you have so little time to react. There are rooms to be searched that will usually have something of use in them. There are two types of room: those with desks and those with crates. The desks are where you're likely to find the compass hidden in one of the drawers. Crates contain ammunition, flares, medical kits, Viet Cong weapons or nothing. The medical kits help to restore the health of your soldier and ammunition is always needed. Some of the rooms with crates have ladders in them, but only one takes you out of the tunnels.

Night has fallen in the fourth stage of the game and you're resting in a foxhole. A group of Viet Cong troops suspect your position and start to stalk towards you. They're only shadows in the moonlight until you shoot up a flare, then they come into clear view. Shoot them all or they'll spot your muzzle flash and hit you.

Eventually dawn breaks and and you set off in search of Sergeant Elias, your platoon leader. Instead you meet Sergeant Barnes who tells you that Elias is dead. Later you see Elias being chased and shot by the Viet Cong. You realise that Elias's death is indirectly the fault of Barnes because he didn't aid Elias. A garbled message comes in over the radio, the area that you're in is about to be napalmed because of the high concentration of Viet Cong. You have two minutes to get to a safe area. The compass will guide you there. Enemy soldiers fill the surrounding jungle and there are many paths that you can take; not all of them will get you to the safe area in time.

The foxhole lies before you in the final stage and Sergeant Barnes is in it. Barnes has decided that you know too much and opens fire. The airstrike is imminent and so you have no choice but to blow Barnes out of the foxhole with a few well placed grenades.

Throughout the game a tune plays and it's one of the best pieces of music I've heard from the CPC for a long lime. Sound effects are just machine gun fire. The graphics are disappointing and lack detail.

If you haven't got a 128K machine then the game is a multi-loader, otherwise it's all loaded into memory at once. The first section is a bit tedious and you'll play a lot of games before you make it across the bridge. The major problem is that you get hit too easily and morale is soon plummeting. The difficulty is set just a little too high and medical kits are really needed before you get to the tunnel section where they first appear. That doesn't matter though because once you've got through the first section you'll find that the game has a lot going for it.

Complete stage one of the game.

The trip-wires are even more difficult to spot in green than in colour but the rest of the game is clear enough.

Graphics 56%
N. Not much detail in the graphics.
N. Slow and jerky scrolling in the jungle.

Grab Factor 78%
P. I'll get to the village in one piece, even if it kills me!
N. The first stage is difficult and boring.

Overall 82%
P. Some good old arcade action with plenty of foes to blow away.

Once you've got through the first section, you'll find that the game has a lot going for it.