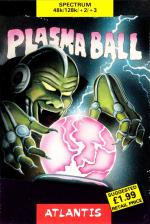 It's a tough life as a ball of high-energy plasma. Advantages such as never having to go to the lavatory are offset by the difficulty of, say, reaching something on top of the wardrobe or opening a tin of peas.

On a series of space platforms on the planet Odessia Mellenia (I only know the name 'cos it's written in the instructions, not because there are huge neon signs saying "Welcome to Odessia Mellenia, Please Drive Carefully), you have to fight your way through the natives to return to your home planet. The tetrahedrotrapezoidopolygonal (roughly diamond-shaped) platforms are pretty hard to steer around - whether you're using joystick of keyboard, once you start moving your plasma ball, it's easy to career over the edge and lose a life. However, there are low and high ball response options, so you can choose which suits you best.

Once you've managed to practise controlling the ball, your aim is to bump off the baddies on each level by blasting them with positive energy. To do this you hold down the fire button and release it as your power meter (at the bottom right) builds to maximum strength. A blast of energy heads off in the direction you're moving, doing nasty injuries to the negative ions and IT creatures holding you captive. At the end of each level there's a super ion which takes several hits to destroy - then it's on to the next level.

Later levels feature energy draining tiles, bottomless pits, ice tiles which make you skid around like Jim after half a shandy, lightning bolts which give you energy, and bonus stars which you must collect for extra energy on the bonus levels.

With fifty levels to complete, you'll probably be fed up of Plasma Ball before you come within sight of the end.

The sound effects aren't anything remarkable, but because the isometric graphics are quite nice, the end level nasties are suitably repulsive and it's dead cheap. I'm inclined to suggest you give it a buzz.