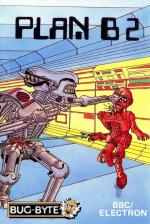 One of last year's most underrated pleasures was Plan B, undiscovered by many of you apparently but the cause of much rejoicing by those who bought 'a budget game'.

It was, however, a real hot number of the Elk and so, unexpectedly, we have a sequel by the same team of Andrew Foord and Paul Brittan. And really it is just like playing the original - there seems to be much more happening on screen at any time and the graphics are more detailed but (and it's a big but) the games are virtually identical.

Now I don't mind that when they're of such quality, but it's a shame they didn't try something a bit more original.

For those of you who missed out, the games consist of exploration, avoidance and destruction. Great fun! Explore a large computer complex with a war drone (finding keys to open doors), avoid the large number of nasty security robots and destroy computer parts. Your energy disappears rapidly, you need to keep your bearings and you can't help playing it again and again.

A great game - budget choice of the month and another winner. But I just can't wait to see what they can come up with next - let's see you try something new, lads!

A great game - budget choice of the month and another winner.