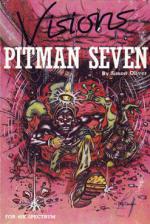 MOUNTING EXCITEMENT IN MINE RESCUE

IT IS difficult to see why Visions set its Pitman Seven, an arcade game for the 48K Spectrum, in a South African mine, as that can scarcely count as a major selling point.

Pitman Seven promises plenty of action and excitement. Two teams of seven men are trapped underground and your job is to bring each one to the surface, despite a series of falling rocks which pursue the men along the shafts. You can climb ladders or drop through trapdoors and if you are lucky you might even be able to avoid the boulders by jumping over them.

If you manage to get your men to the top and to safety, you go to the next level, where waves of gas create an additional hazard.

The object is to collect a series of strategically-placed suits to protect yourself as you try to escape.

The concept of the game is yet another variation on the mzze-with-hazards theme but the pace of the action is well-judged and the graphics are very professional.

The computer also offers some hard-hitting comments about your performance at the end of each mission.

Yet another variation on the maze-with-hazards theme but the pace of the action is well-judged and the graphics are very professional.