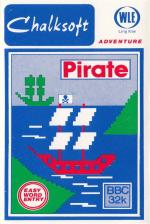 Pirate is a two-part adveture aimed at young people, and featuring full-colour graphics, animation and sound.

You are the captain of a pirate ship and you must steer it through the maze of reefs and islands, battling with other ships to collect jewels and treasure.

If you successfully complete part 1, the computer will let you go on to part 2. The function keys are used for the commands, making it very easy for youngsters to communicate with the computer.

Instructions are displayed on the cassette insert, and more are available on request in the introductory program.

The displays are very colourful, using a split-screen technique to show the scene graphically at the top, using Teletext graphics, and the narrative at the bottom.

I personally found the pace of the game somewhat slow, but right for the youngsters who are likely to be playing the game.

Sound is used extensively, although the repetitive sea shanties began to grate after a while; a sound on/off feature would have been nice. A game SAVE facility is sensibly included.

More interesting and colourful than plain narrative adventures, children should find lots to interest them here.

More interesting and colourful than plain narrative adventures, children should find lots to interest them here.