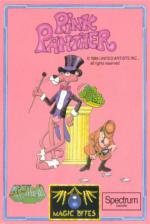 It's clear from the pink cassette inlay, and pink instruction leaflet that this game has definite pink connections. Even the tape itself is, er, red.

Pink Panther is a game that's been around for a while on those big, juicy 16-bit machines, but I won't go on about that - I know how tetchy you all get. Let's just say that it got a pretty cool reception, and unfortunately it looks as it this conversion will meet a similar fate.

With his credit limit reached once again, PP has decided to get a job as a butler. There are four jobs to choose from, and he has to buy smarter, more expensive clothes to qualify for the better-paid ones. The idea is that once he's wangled his way into the job he'll be able to do the rounds (once his lordship's in bed) and clean up.

There are three options on the title screen. Press 'up' to buy clothing and 'left' to choose a job. Pressing 'right' prints a flashing desert island on the screen and the game locks up. This would be fine, except I must have done it about 6,357 times by accident, so I spent most of my time re-loading the darned thing. Still, at least the gameplay whiffs of originality, obviously a result of its German origins.

Once inside the house of his choice, PP discovers an unfortunate fact, his employer's a sleepwalker. So unless PP can stop his employer bumping into things as he wanders around, PP's employer will wake up and catch him in the act. But luckily, there are a number of ways to prevent this. The simplest is to face the chap and press 'fire', which will push him in the opposite direction. Ringing a bell makes him turn in or out of the screen. There are also catapaults, and boards which can be left around the place to point him in the right direction.

Another snag is that as always the formidable Inspector Clouseau is on the trail, and he'll have to be avoided too.

It has to be said that the graphics are quite good in this game. Considering the critical lack of the colour pink in the Speccy's palette the programmers have made rather a good job of it, if you don't mind the slightly garish colours and the obligatory attribute-clash.

But unfortunately, despite the nice graphics and original design, the whole thing just fails to come together. The way the sleepwalker responds to your attempts to control him seems a little erratic, and the system of choosing objects is far too slow to use at awkward moments.

So, in a wrapping-it-all-up-nicely sort of way, I'm sorry to report that this one seems to be a bit of a wasted licence. A shame, really, considering the thought that must have gone in to it. Give it a miss and you'll be tickled pi... [Snip! - Ed]

Original, but a bit of a berm to play if you ask me.

I'm sorry to report that this one seems to be a bit of a wasted licence. A shame, really, considering the thought that must have gone in to it.