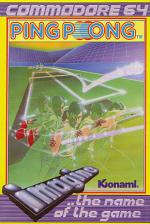 Based on the Konami arcade game, Ping Pong is a table tennis simulation. Your bat is suspended in mid-air by a phantom hand as you try to smash the ball past your opponent or force him to hit it off the table or into the net.

The game is played up to eleven points, not twenty-one as in the real game. The rules are also changed if the score reaches 10-10, but these are minor differences. You have a choice of shots - a defensive chop, a forehand and backhand drive and a superfast smash. The bat is positioned automatically for you - as in games such as Atari tennis - so that all you have to do is to choose how you are going to hit the ball and when. Timing affects the angle at which the ball comes off the bat.

Points are scored every time you hit the ball - ten points a time. If you win the point with a smash, a bonus of 500 points is awarded; this also applies if your opponent tries a smash and misses, which seems somewhat strange. If you win your match, more bonus points are awarded according to your margin of victory, and then it's on to the next of the five levels.

The graphics, although simple, work well with the bouncing ball especially effective. The sound effects are nothing special with a strange growl being emitted whenever you lob the ball up high. The most annoying aspect of the game though is the wait between points which slows the game right down and reduces the lasting appeal. For once the game's title is accurate. Ping Pong it may be, table tennis it most certainly isn't.

The graphics, although simple, work well with the bouncing ball especially effective.