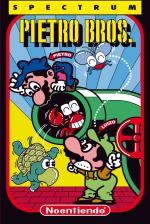 I grew up with an Acorn Electron and one of my favourite games was called Drain Mania. I learned, several years after I first encountered it, that Drain Mania was actually a clone of a much more famous title. Mario Bros. No, not Super Mario Bros - that didn't come along until the advent of the NES - but when the brothers were teeming up to defeat Inky, Pinky and Dinky in the sewers of Redcar. Well, in my eight-year-old mind they were, anyway...!

Pietro Bros. is a version of Drain Mania, oops, I mean Mario Bros. for the Spectrum. You play an agile little Marioesque sprite and must rid the sewers of the turtles, crabs and other nasties. You do this by headbutting them through the ground of the platform below. Time your bound correctly and, as your bonce makes contact with their nether regions, you'll flip them on their backs. That's only half a job though, as you must then find your way to the platform upon which they are stranded and kick them out of the way. Only then will each of them disappear, never to return.

Leave an enemy too long, and it will right itself. Not only that, it'll become more ferocious, moving at double- or perhaps even triple-speed.

Is it any good, then? Well, sadly, the answer is that it's a hell of a lot worse than the Electron's Drain Mania but, thankfully, it's not a complete horror show.

The first problem is the playing area. As you might expect, the screen has to accommodate three platforms, the 'pow' block (which, when headed, flips all enemies on their backs) and a number of pipes. This is a lot to squeeze into the 256 x 192 pixels of a Speccy screen, and as a result the game feels incredibly cramped.

The next issue is the pace. Drain Mania started the player off with quite an easy couple of levels; Pietro Bros. does no such thing. The first screen chucks three turtles at you, plus a bouncing fireball and a pinballing water droplet. All before you've even got time to formulate an action plan! Pietro himself also skids a fair way whenever you stop moving him. In Drain Mania, the early levels had no skid, but subsequent sewers steadily increased in slipperyness. Perhaps I'm too familiar with Drain Mania, but I found the high level of skill required of the new Pietro Bros player ridiculously high.

Add together a cramped playing area and a lack of control and the result is a manic, titanic struggle against the odds. There are just too many baddies and too much happening to be able to realistically clear the screen by means of skill rather than luck. A case in point are the fireballs and water droplets that "randomly" appear. In Drain Mania, the fireball moves much more slowly than it does here, and you can make an educated guess as to whether it's going to end up, just because you have the time to guage its direction and velocity. In Pietro Bros., it seems to follow you almost like a homing missile. The cramped playing area makes it impossible to duck under or otherwise hide from and if you think you might be able to outrun it, all that's likely to occur is you career straight into one of the mutant turtles instead!

The effect of that 'Pow' block I mentioned earlier also proves to be somewhat illusory. I headbutted it initially expecting that, a la Drain Mania, all enemies on-screen would be removed. But no... Pietro Bros just flips them onto their backs, and even this is pretty hit and miss. If any baddies were already on their backs the 'Pow' block toggles them to mobile again. Oh, and the block itself seems to get in the way of your jumps back up to the platforms above too. I nutted it several times without meaning to - a problem I've never had with Drain Mania.

Every two screens cleared presents a bonus round, in which you must collect the coins that hang from the ceilings. Again in Drain Mania, this is a frantic dash in which you'll have to headbutt some 20-25 places on screen in about 60 seconds. In Pietro Bros. there are six coins and it takes an age to get your character anywhere near them, let alone leaping up to them.

Fortunately, despite all these drawbacks, there is one great advantage Pietro has over Drain... you can play co-operatively with a friend. What's more, the number of baddies doesn't double if you do this meaning it's possible in a two-player game, to get much further and to feel much less frustrated as a result. There is still the problem of the cramped playing area, of course, but it seems less acute when a friend is helping you out. And, needless to say, you'll probably manage to clear all bonus stages of all coins if each of you collects only the coins from his own area.

There's a nice tralalala each time you start a game (or die), a high score table and an options screen. Plus, the game is programmed with the Nirvana engine, meaning the sprites are multi-coloured and there's no colour clash. In fact, the game doesn't look a lot like a Spectrum game at all. I wouldn't go so far as to say it looks like an arcade game though...

Overall, I feel that, despite showing some promise, Pietro Bros. only secures half marks. There's no denying that the coding powering it is clever, and there's clearly a great little game in there somewhere trying desperately to get out. If the Spectrum had the resolution of the Electron - 320 x 256 pixels - I think Pietro would mean serious business. That's simply because there would be more time to plan your actions in such case. Perhaps it's unfair to criticise this aspect of the game too harshly though, particularly as it's a Spectrum limitation rather than a game one.

Nevertheless, the combination of disadvantages leave you too often forced either into running or jumping out of harm's way. Ultimately, this makes Pietro Bros. far too frustrating to persevere with for long.

Ultimately, far too frustrating to persevere with for long.