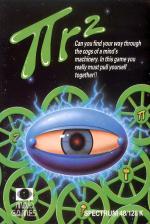 You know what it's like - faced with a tense situation, your mind goes blank, you can't think of anything, and you feel like the thickest person. Oh sorry, you're like that all the time? Well, Professor Storm isn't, but he's desperate to collect all his intellectual thoughts and put them firmly under control.

And to do that he must travel through his own mind, which is made up of interlocking cogs; Storm can travel either clockwise or anticlockwise on their rims. Travelling with a cog's motion increases the prof's speed, while movement against it slows him. If Storm just stops walking, he moves at the same speed as the rim.

All this rotating is to help our egg-headed hero reconstruct the scientific formulae he once knew; when he completes one revolution on a wheel rim Storm picks up part of a formula, but only by collecting all the parts in the correct order can he move to the next level and the next piece of disassembled knowledge. (The required formula is displayed at the beginning of each level.)

Storm's otherwise routine task is hindered by stray, distracting thoughts. Some journey predictably on the cogwheel's rims, but others switch randomly from rim to rim, or even home in on the poor befuddled man. If these touch the dear professor they can reduce him to a moron - so keep a check on Storm's IQ. If it falls to zero, he loses one of his five scholarly lives.

Some wheels have fond memories or abstract thoughts at the centre, and they can temporarily paralyse him Storm or take down his intelligence.

But to help him in his rotating task the professor can collect other objects from the centres of the cogs: a book raises his flagging IQ, a calculator speeds up his movement on a rim, a hammer lets him swat a stray thought, and if the prof finds a trash can he can dump in parts of a formula in the incorrect order.

'After a few games I started to enjoy swinging from cog to cog and saving the poor old professor from a very embarrassing situation. Graphically Pi-R Squared is nothing startling, but it's competent and quite playable.'

'This latest Mind Games extravaganza certainty taxes the old grey matter as well as requiring some lightning reflexes. Pi-R Squared has all the appeal of Think!. The concept is amazingly simple and straightforward, but each level is ridden with a fiendishly constructed array of wheels. And there are some vicious stray thoughts, making planning essential. It might be a bit expensive - but there are mounds of addictivity in Pi-R Squared, and it's definitely worth fiddling with.'

'If you're trying to forget all that maths homework you haven't done, avoid this one! The central character looks like a cross between Bobby Bearing and a baked bean and the scrolling is terrible. The idea is simple, and so are the graphics - but their presentation and the different formulae to work on make it highly addictive. Pi-R Squared is a brilliant little game.'

The concept is amazingly simple and straightforward, but each level is ridden with a fiendishly constructed array of wheels.