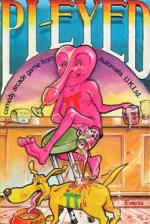 In a further attempt to undermine the integrity, purity and clean livingness of the noble arcade tradition, Automata, the well-known TV pundits on computerology, have released Pi-Eyed. This game is destined to go straight to the top of the Moral Majority Chart of unfavoured programs!

It stars none other than the Piman, but a Piman to whom success has had a deteriorating effect. He's hit the bottle and now staggers bleary-eyed from pub to pub In search of liquid oblivion.

The scene is the street, and Piman is trotting along. If he gets hit by a car he loses points. You can take him into one of the many pubs lining the street, but he can't leave until he has drunk all the pints on the bar. This involves diving in between the chatting regulars without disturbing them (loses points), slipping up on crisp packets and things (loses points) or slipping on slops (more gone).

And of course there is also the by now obligatory treat of a bonus hit single on the reverse of the tape. Pi-Eyed, described as a heart-rending message, written by Lurch, the office parrot.

'This is a sort of 'Frogger both out on the street and in the pubs, dodging the cars and drinkers. It manages to be fun, and the things people say in some of the buildings is often funny or Insulting or both. I found the Piman a bit difficult to control when inside a pub, as he tends to jiggle when drunk. Also, at one bar there was a figure with a dog in the way, and after all efforts, the final pint remained unobtainable on the bar. I would have to be honest and say that this wasn't one of my favourite games.

'The graphics are very entertaining and colourful, and the game amusing to play for a short while. It certainly couldn't be called addictive though. I would guess it's the sort of game that appeals to Pimaniacs as light relief between trying to win 6,000 or a trip to Hollywood.'

The sort of game that appeals to Pi-maniacs as light relief between trying to win £6,000 or a trip to Hollywood.