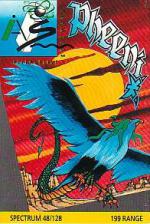 DH Lawrence lived before computer games and his symbol was the Phoenix. He didn't think people should go to school, so no doubt he would've approved of Alternative Software's Pheenix, spelt in true non-skool attender's style.

At £1.99 a flight I'd be chary to criticise this game as feather brained. Indeed it's all hot-blooded action in true Lawrentian style and after all at that price you'd normally be content for the thing to load.

The Pheenix concept goes back to the original Space Invaders - though the emphasis isn't so much astral aviation as avaries. You're in control of a space ship that's besieged by squadrons of feathered aliens, nay, positive gaggles of the things. Your aim is in true Space Invader's style - blast as many as possible from the firmament.

The first screen is fairly simple - you can usually avoid the enemy as long as you don't get stuck in a corner. Get stuck and your five lives will start ticking off, no matter how famed the Phoenix may be at coming back from the dead. Thing start hotting up on screen two 'cos you've got to zap the eggs before they hatch out into beastly birds that take great pleasure in dropping things on you from a great height. I'll be generous and assume that they're actually eggs but it did inspire a sense of relief at the though that cows can't fly. Screen three is blab the mothership time though it certainly ain't easy.

The five skill levels are based entirely on speed, and oh boy, I can assure you that level five really does motor. As punk is to Bryan Ferry, this is to all those nice laid back shoot 'em ups you've seen before. What you lose in namby pamby graphics, loony tunes and pseudo Star Wars posing you make up for with 100 percent playability and a completely orgiastic surfeit of gratuitous destruction. Yup, ol' DH would've loved it.

What you lose in namby pamby graphics, loony tunes and pseudo Star Wars posing you make up for with 100 percent playability and a completely orgiastic surfeit of gratuitous destruction.