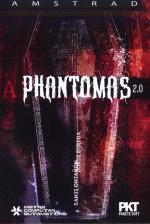 Phantomas was originally a Spanish game for the Spectrum 48K and Amstrad computers released by Dinamic in 1986. It was in the Spanish language and the rights to sell it in the UK were acquired by Codemasters who released it as Vampire. The UK home computer market was a bit richer than the Spanish one, and Phantomas wasn't particularly innovative to begin with so, in the UK at least, Phantomas was just another humdrum budget game. In Spain however, the original Phantomas became a bit of a cult and, thanks in large part to The Mojon Twins programming about a hundred sequels to it a few years ago, the character is now just as famous as "Phantomas" over here than Vampire's "Brok The Brave".

So much for the history lesson. What's Phantomas 2.0 all about? Well, two fans of the original Phantomas, Jordi Sureda and Santiago Ontanon, were disappointed with the limited colours and sounds of the original Amstrad version of the game. Phantomas 2.0 is therefore their re-imagining of it with an improved colour palette and a number of bouncy tunes whilst you play. The underlying game is exactly the same though, which means it retains all the toe-curling, hair-pulling frustration of the original - it's just now in the equivalent of HD rather than grainy old VHS.

Phantomas is one of those platform games that are very hard because they demand pixel-perfect accuracy. The most notorious example of this genre is another Spanish game, Abu Simbel Profanation, also originally released by Dinamic. The good news is that Phantomas was never in the same league as that particular suicide mission, but the not-so-good news is that it did include some similar annoying features. Falling into a well, for example, will immediately wipe out all of your lives, no matter how far you have progressed in the game.

What it all boils down to is a typical quest for collectables, a bunch of roaming nasties to avoid, platforms upon which you must precariously perch and a demand for skill and luck in equal measure. It's likeable enough and this colourful new version has mirrored the original to a tee. Doubtless it will be considered a definitive version of the original by Phantomas fans.

The key problem when developers reimagine 'classic' titles like this is that the game's audience is primarily those who are already well familiar with the original. And that means that the audience is primarily players who have played the original to death. And, because there are no Easter Eggs, or indeed any real differences over the orignal, they will fly through this in the same way. To those who are not familiar with the original, there's barely any draw whatsoever.

That's not to say that Phantomas 2.0 is bad. By all means, have a play with it and see how far you can make it through before you come a cropper. And yet, well, there's nothing that particularly shines about it. It doesn't have any particular bugs or features of note. It's just the usual run-jump-pause affair of a thousand other platformers. So although it may look and sound superior to the original, I personally doubt I'll be coming back to it any time soon.