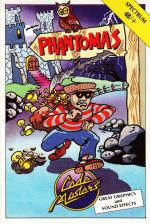 Do you ever get fed up of being a hero all the time? Ever thought: "That's it - no more Mr. Nice Guy?" Well, here's your chance to play a villain for a change. Phantomas is a mutant, specially designed to rob, steal and plunder.

Unfortunately, he/she/it was also designed to avoid capture by the enemy in the war of the red moons on Alpha Centauri. This skill came in most useul when Phantomas decided to escape from his builders and set up as an intergalactic criminal. The local paper - the Galaxy News - kept him informed of who was in need of being parted from his wealth and it is on one of these escapades where you come in. A very rich miser named Godter owns a mansion and grounds that are rumoured to contain both a strongbox and jewels.

Naturally, Godter believes that his treasures are safe, so it's up to you to aid Phantomas and prove him wrong.

The game is a mixture of platform game and arcade adventure with some nice original touches thrown in for good measure. Starting off in the grounds, Phantomas is trying to throw 36 levers that lie scattered around. There is the usual assortment of nasties trying to stop you but there are also energy cubes available to keep you going that little bit longer. Godter is obviously a keen collector of flying machines for his garden is full of them. What's more, some of them still work and transport you to far flung corners of his grounds. Here, you might have to avoid giant rocks in a decathlon type race against time. i.e. You hit the keys as fast as you can or the rock crushes you

An unusual touch is that you have both a long and high jump available to you as you try to avoid the obstacles. Gradually, you make your way into the palace and underground complex, still searching for the switches and strong box. When the alarm goes, you know that you have found them all. Getting the jewels is a bit trickier though and there are a couple of riddles in the instructions to be solved first.

Although platform games have been done to death, Phantomas has enough original touches to make you sit up and take notice. Couple that with bright colourful graphics and a budget price and Codemasters look to have a winner on their hands.

Although platform games have been done to death, Phantomas has enough original touches to make you sit up and take notice.