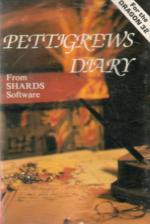 This is an adventure in three chapters linked by the diary of the title. The chapters are independent, but you can only progress by completing the earlier ones.

Chapter 1 is a graphic adventure set in a burning farmhouse. A birds-eye view shows you the rooms, you (represented by a cross), and deadly flames, shown as circles, spreading through the house.

Your task is to find a certain object which you need to be able to obtain the code allowing access to the next chapter.

Chapter 2 is a real-time text adventure, set in London. The object of this chapter is revealed by the diary. You begin with Â£100 and must be careful, as Â£10 a day is necessary for survival.

You can travel on the underground for Â£2, using the arrow keys for movement.

So far I have been, among other things, fined for causing a breach of the peace, robbed and set to work in a kitchen.

I have not, however, been able to acquire the right knowledge to progress to Chapter 3.

According to the written instructions, Chapter 3 is entitled European Trek and consists of eight separate challenges.

Other Dragon 32 Game Reviews By J.E.M.

The chapters are independent, but you can only progress by completing the earlier ones.