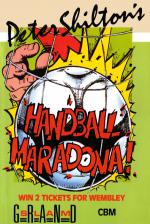 First of all, let us get a few things straight. This is an arcade style goalkeeping simulation which features neither Peter Shilton nor our groping Argentinian chum, Diego Maradona. The object of the game is to progress through sixteen skill levels, ignoring the usual footballing distractions such as the league or cup.

A team is chosen from the list provided and the player's initials typed in. When this compulsory faffing about is over and done with, a menu appears displaying four options: Practice Session, Play Game, Skill Upgrading and Restart Game. If the former option is chosen the player has to survive five attacks from the opposition. A panoramic view of the pitch is displayed, with the goal and goalie at the top of the screen. Two fat-kneed sprites posing as your defence wander about aimlessly, while the opposition plough their way towards the goal, eventually hoofing the ball in your direction. This is where the player comes into the action. Using either the joystick or keys to control the keeper's action, the player has to save the shot.

The 'Play Game' option runs along similar lines, this time in 'match' conditions. The game is split into two halves, consisting of four attacks each. Your team scores randomly - it's up to you to make sure the opposition don't. When the final whistle has blown, the score is displayed and the action returns to the main menu.

The final option, 'Skill Upgrade' requires you to save four shots. If you do, the skill level is upped by one, and a code is given which can be input the next time you load the program. Thus, you can immediately jump to the level you finished on in the previous game.

The program includes "speech" (although it sounds like a Dalek with Laryngitis) and assaults the ear with such gems as 'petashiltunhanballmaradona' (to tell the world it's loaded), and 'goal' and 'save' to inform any blind spectators of the proceedings. The graphics are reasonable, although the sprite players tend to look rather like good old Diego himself ie: as wide as they are tall.

The biggest drawback is that the program is severely limited. It's great fun trying to keep goal, but once you've played a couple of times it becomes apparent that there are a very limited number of attack patterns. There are only three different options and they're all very similar, offering little in the way of reward or objective. It's a shame that the program is seven quid - it's vastly overpriced and not really worth buying.

A budget price would have been far more sensible for the couple of hours entertainment that it offers.

Offers a couple of hours entertainment at best... Not really worth buying.