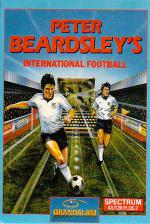 Peter Beardsley's International Football is obviously the latest footie (what did you expect - Origami?) simulation, from Grandslam. Following the Matchday rather than Football Manager game format, you choose your team from one of the eight international teams represented, and must then play your way through to the finals of the European Cup. First though, you have to play the other three teams in your group, whilst the computer simulates the other matches in both groups.

Depending upon which you choose, the duration of the match will be from five to twenty minutes. When play starts, you find yourself controlling, not the ball as such, but the player from your team who is nearest to the ball. You can move your player in eight directions (if you've a joystick that is) and 'kick' the ball in as many directions too. The strength of kick is determined by the length of time you hold the fire button down, before releasing it. And, er... that's it. Nothing else much to say, really, apart from the verdict.

Well, I've got to say it. This game plays about as well as England did in this year's European matches. It's a classic case of 'We've got the licence, let's knock a game up and get it on sale quick.' The game is a mediocre footie simulation, which relies more on luck than any amount of joystick juggling, and the most realistic aspect of it is that the teams change ends at half time. Passing is near impossible, because for most of the time your other team members are on the part of the pitch not on the screen.

'Scrolling' is a generous term to use for the movement of the screen, which has got more jerks than a Rick Astley concert. As for using your goalie to save, forget it. If one of the opposing players takes a shot at goal, by the time the scrolling has caught up with the shot and you can see your goalie, it is too late to get him into a position to save.

This might sound like I am overdoing the criticism a little, but I am only countering the information carried on the packaging. On the Spectrum box, it describes the 'large animated sprites, whistle happy referee, excitable commentator and a tuneful football anthem'. Doubtless these feature in the 16 bit versions, but to describe these features on the Spectrum packaging when they are not in the game is at best extremely misleading, and at worst downright porkies.

Compared with some of the similar footer simulations on the market, this game is primitive, and if you are looking for a good version of the ol' sport, look elsewhere.

Grandslam deserve a red card for this load of (foot)balls.

Grandslam deserve a red card for this load of (foot)balls.