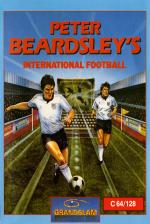 Another game of pixellated pigskin pushing hits the C64, Plumph. This one, for a change, is endorsed by the famed Boy's Own Geordie hero, Paul Glancey. No, just a joke: it is, in fact, Peter Beardsley.

The game is standard football, except that you don't have to wear an expensive Fila shirt, stand ankle deep in mud or have your legs kicked to pieces to participate fully in the proceedings.

It begins at a menu screen. Here you can select various play options. Two players can take part in the game, or one can play against the computer team, but in either case, the human player has to pick a country which he wants to represent (this is 'international' football, remember). From there, you can select the length of the game in real-honest-to-goodness-time, from five to twenty minutes. Moving quickly along, you can then enter a one- or two-player league competition, and select which teams play in the two groups.

After that, it's football, in the standard scrolling grandstand format. Throw-ins, goal kicks, extra time, but no Stanley-knife-wielding, racist or coin-throwing fans. Ah, the wonders of the computer age, eh?

There I was, thinking that the standard of footy games was improving, but, cripes, aloong comes this one and proves how wrong a fella can be. I would mention its good points, but I honestly can't think of any, apart from the league and tournament features.

Bad points, oh, yes, it's got plenty of those, so I'll list them. The player sprites look like hunchbacks and walk like they're pedaling bicycles, except for the goalkeepers who slither along their lines having no effect on play whatsoever.

The instructions say that the longer you hold the Fire button, the further you'll kick the ball (which, incidentally, moves as it's filled with water) but when you do try to pass or shoot, you have no real idea how far it's going to go because a) the strength gauge mentioned in the inlay didn't exist on our copy, and b) there is effectively only one kick strength.

The worst thing was that the computer didn't seem to have much idea about where the players should be, and if you move forward straight after kick-off, you come across players in the opposition's half who theoretically shouldn't be there.

As a footy sim, this makes a good throat lozenge.

The rebirth of the computer football game has really brought forth some stars, such as Tracksuit Manager, Emlyn Hughes' International Soccer and Microprose's forthcoming Micro Soccer. You'll notice I didn't list this game among those others, and there's a simple reason for that - it's abysmal.

Even the age-old International Soccer had more realism than Peter Beardsley and there are so many flaws in the game that it is no fun to play. You thought the graphics in EHIS were chunky? They have nothing on this game.

Not only are the players expanded sprites, the programmers have put a black outline around their limbs to give that extra dog-foody look. The sound is equally poor - just a choice between nobody's favourite football crowd songs or nothing.

I can't imagine even the most desperate football fan either buying or enjoying such a low quality game of their favourite sport.

Presentation 39%
No title screen at all. Lots of tournament options, but they don't make the game any more playable.

Graphics 36%
Deformed chunky sprites shamble up and down the pitch, wondering what they should be doing next.

Overall 23%
One of the worst football games around at the moment.