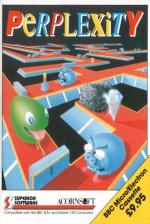 This latest release from the realms of Superior Software is a totally new concept. For anyone who has not yet got a copy, Perplexity is a cross between Repton and a Pacman-type atmosphere.

The idea of the game is to guide your small man, reminiscent of a pacman, around the sixteen 3D screens, pushing yourself against ordinary boulders in order to break them open, revealing diamonds, whilst the boulders with a question mark fixed on them reveal different objects such as a 'key swap', magic potion, hourglass or a bonus. Black boulders are just there to get in your way.

The screen displays the game playing area, with a map to the right of the whole area showing how many boulders there are to break open, how many diamonds, how much time left until you lose a life and also how many special potions remaining.

By collecting four potions you receive an extra life, to add to the four you get anyway. The hourglass (obviously) gives you an extra 50 seconds, whilst the key swap is very annoying as it reverses two or all of your movement keys... so don't try rushing around, because then you get one of these unless you find another very quickly, you'll go mad!

It is quite difficult to explain the game but the Repton part of it comes when you have to work out where to push a boulder, in order to make it smash into another boulder - this is the only way of breaking them open. Keys also pay a vital part as they must be manoeuvred so that they line up with the doors which they open.

On top of all this the only other hazards you encounter are monsters, which on contact are deadly. All in all, I quite liked Perplexity and its frustrating puzzles but I found the map was pretty poor, with very small blocks making it hard to distinguish their function. Otherwise, I thoroughly recommend it.

I quite liked Perplexity and its frustrating puzzles but the map is poor, with very small blocks making it hard to distinguish their function.