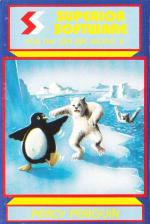 Percy is trapped in an ice maze populated by deadly Snobees. You must position the penguin next to an ice cube to skid into another ice cube or the side. Any unfortunate Snobees in its path are crushed.

The graphics are fairly good, but movement is slow. After crushing an ice cube Percy stays still for a second or two, leaving the Snobees a chance to kill him. Extra points are awarded for lining up diamond cubes. Hard to get used to, with time it becomes quite addictive.

The game has good sound. As you start the opening bars of 'Toccata' are played and throughout music is played. The instructions are quite clear and concise. For some reason an irrelevant picture of 'Percy's Home' appears after the instructions.

The major problem is the increase in difficulty. The first few Snobees are easily killed, but the last one is nearly impossible. I have noticed this in a number of new games.

Major problem is the increase in difficulty... The first few Snobees are easily killed, but the last one is nearly impossible.