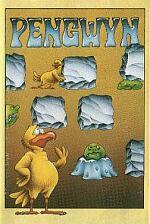 When I first tried Pengwyn, I wondered why the game was so ponderous. Then I spotted that the cassette is printed in identical fashion on both sides, but each side is dedicated to a different to a different computer! While one side is indeed for the Electron I had mistakenly loaded the BBC version. Still, the slower speed enabled me to develop some tactics so that when I loaded the correct side I had managed to stay alive for a while.

Many of the best games are simple in concept, and one of my all time favourites has been Jet Pac, which I enjoyed when I had my S*e*t*u*. In Pengwyn, the storyline is equally simple. The feathered friend stands surrounded by blocks of ice and three vibrantly shining eggs. By melting and/or sliding the blocks, the Pengwyn has to get the three eggs in a straight line anywhere on the screen.

Sounds simple, doesn't it? The trouble is that a couple of yellow monsters melt out of the blocks and pursue the little bird, although their movements are predictable.

It's a lovely feeling when your Pengwyn slides a block which then crushes a monster flat - although another monster is always waiting to melt out.

What makes the program good value? I can't say it's the sound, which is barely adequate. But the animation is superb, with some delightful touches - like the bird's feet dancing around on the cold ice. When the poor creature is trapped, its look of total bewilderment and dejection is a masterpiece of comic pathos. With a high score table to keep tabs on your progress, it's the kind of program you will go back to again and again...and again.

With a high score table to keep tabs on your progress, it's the kind of program you will go back to again and again.