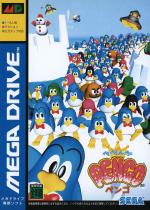 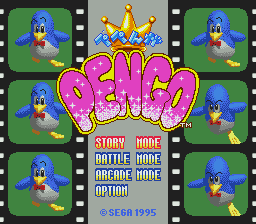 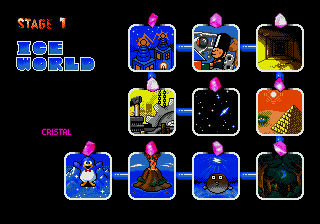 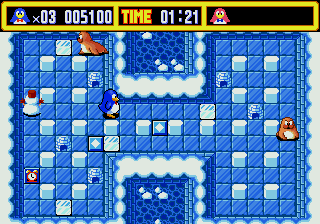 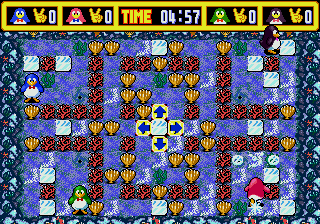 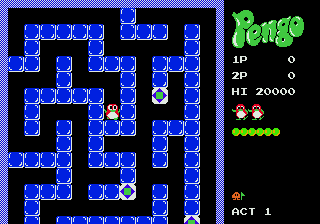 Many animals have lent their athletic prowess to video games - hedgehogs, worms and squirrels have all taken the limelight, Mother Nature squeezing her way through tunnels and over platforms with varying degrees of success.

Of all the animals you could wish to put through their paces, penguins wouldn't be an obvious choice - our lardy little Arctic friends are flightless birds who waddle along firm ground, only coming into their own once they've belly-flopped into the water. Indeed, some have argued that their greatest contribution to Western civilisation is the tasty filling they provide for a well-known brand of chocolate biscuit.

Many moons ago, however, penguins were the stars of an elderly coin-op which saw our chubby chums skate around, propelling huge blocks of ice at blobby little Pac-man type creatures. Pengo was a cheeky little puzzle game which found its way onto a variety of systems, providing endless hours of fun for annoying adolescents hunched over their ZX Spectrums and BBC Micros. People like me, basically. Anyway, those days have long since been consigned to the skip. Pengo, however, has been reborn for the Megadrive, featuring the classic game we are know and love as 'arcade mode' and a graphically souped up confrontation as 'story mode'. Let's tip toe through the ice flow...

Another entry into the retro coin-op conversion stakes - this time with a dose of penguin-bashing thrown in.

Bonuses can be arrived at in the same way in this as in the original - each level contains three diamond blocks which look a little different from the common or garden ice blocks you usually push around.

Line these three blocks up against each other and your points tally will be accordingly swelled. Other useful power-ups come in the form of blocks (which freeze the progress of the ticking time limit for a while), ice shovels, extra points and extra lives. Watch out for ball and chain icons, which slow you down, and a curious little icon which annoyingly reverses the results of all your joypad presses - forward sending you backwards, left sending you right etc.

Assuming the people you challenge are more ingenious than the little brown seals and blow fish you're otherwise up against, this part of Pengo really comes into its own with other people. Up to four players can plug in to this (in 'Battle Mode') and slug it out in a variety of locations which stretch the very basic format about as far as it can go. However seemingly fiendish the settings, the basic principle of shoving ice blocks all over the shop remains unchanged.

Ask your dad about this - he's bound to remember the fun he had as a lad, pushing little ice blocks around increasingly taxing screens. This is a faithful facsimile of the early Eighties fave - you have to scoot around a simple maze of ice blocks, pursued by blobby things which steadily gain speed.

You play as the little red penguin Pento, out to quash (or should that be squash?) the blobby Sno-bees. Manoeuvre the blobby things into compromising positions and kick ice blocks into them, crushing them against walls.

While the blue ice blocks disintegrate on impact with their targets, the while diamond ones can be kicked around any number of times. Just make sure you don't knock them into a corner - they're impossible to kick back out again.

Although this is a game I used to play a lot as a kid, it's not a title I hold a lot of nostalgia for. In fact, I'd forgotten it even existed until this Megadrive carbon copy turned up.

While faithful to the game as I remember it, this has been given go faster stripes in the form of the story mode (Don't ask me what the story actually is - it's all in Japanese!) and the multi-player option. None of this, however, can detract from the feeling this really is a little too old and cranky to merit any serious attention in 1996.

The sticky controls don't help matters much - there's nothing more likely to put you off a game than having a carefully prepared victory snatched away from you as you watch yourself helplessly skidding towards a ram-raiding teddy bear. For no obvious reason. Completing puzzle games should give you a glow of smug superiority. This brings more a sense of relief that it's all over.

Whoops. Bit of a cock up here methinks. A puzzle game with Penguins in isn't exactly the formula for a winning game, is it? I mean it's not bad, but it just doesn't do anything new for the genre. The speed is the main problem in my view.

It's just too slow to pick up the entertainment value, hence I have no desire to play it any further. The multi-player option prevents it from being a complete disaster of a game. In a word: Average.

Animation 68%
N. Erm, well their little legs move as they waddle along...

Music 78%
P. The retro tunes bring back the golden age of 'synth something simple'.

Effects 57%
N. Erm, well let's just say that there's nothing here to distract you from the game.

Playability 75%
P. A simple idea, fairly well executed.
N. Nowhere near as compelling as Lemmings, Worms or even Zoop.

Lastability 69%
N. Well, I never want to play it again, put it that way.

Overall 72%
A simple old fave that simply doesn't cut it any more. One for nostalgics and Pingu fans only.