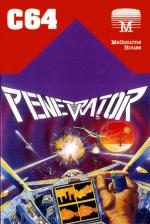 Scramble explodes again to your screens with this 'new' release from Melbourne House. I wouldn't mind playing a good Scramble - I haven't seen a new one for ages - but this latest effort hasn't got anything over its predecessors other than a ripping soundtrack and a landscape edit mode.

There are five separate sectors of horizontally scrolling action before you reach the neutron bomb which you have to destroy. Most sectors are quite easy to penetrate and the rockets and radar stations are just cannon fodder, although it gets much harder second time round.

The colours used throughout the caverns are rather unimaginative and bland, and the actual rockets and radar dishes are very boring, consisting of only two colours. There is quite a nice firework display when you complete the mission, and your ship explodes with stunning finality, but this isn't enough to make any game great.

There is a facility to design and save your own landscapes, so you can make Penetrator as easy or as difficult as you like. Editing is very user-friendly, and you have options to edit the ceiling, floor, and place rockets and radar stations wherever you like.

AARGH! Please, not another Scramble! There's a great musical score, but the grim use of colours and boring graphics don't exactly add to this initially easy and rather bland version. The ability to design your own screens isn't really worth writing home about either.

This conversion of the Spectrum game has taken a long time coming and unfortunately it shows. The flickery graphics are annoying and combined with the colour scheme make it tough on the eye. Versions of Scramble are two-a-penny and this isn't even one of the better ones. The spaceship crash looks good, but dying is a heavy price to pay for a groovy graphic. The marvelous music adds to the game, but it's a case of too little too late with this one.

Melbourne House have made a backward step with the release of this game - there are too many Scramble games available and the scramble theme is very old hat. Perhaps two years ago this would have been a real smash, but today even the addition of a great soundtrack and edit mode doesn't justify anything above an average rating.

Originality 21%
Apart from the edit mode, just another Scramble.

Lastability 45%
There's nothing new about these caverns.

Value For Money 56%
Basically a good, but very old game.

Immediate pleasure, like most shoot-'em-ups. An occasional juddering scroll and boring colours.