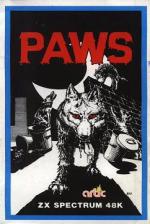 IN THE June issue of Sinclair User we reviewed Cats from Artic, a super little maze game based on the alleged musical by Andrew Lloyd Webber.

There were in fact problems we didn't notice. In the first place, the game wasn't going to be called Cats after all because Artic failed to obtain the rights to the theme from Andrew Lloyd Wallet. Secondly, the version we saw was an early development version, and very much easier than the final game was ever intended to be.

You have to travel a giant Sabre Wulf-style maze searching for your 10 lost kittens, and hunting down or avoiding the bully dogs who prowl the midnight streets.

You're armed with fur-balls and stun powder which knocks out the dogs for a short time. Food and ammunition for the fur balls is dotted all around the maze.

The game is certainly a challenge in the final version, and very difficult to beat, even on the easiest of five levels. The graphics are colourful and the theme effective.

The game is certainly a challenge in the final version, and very difficult to beat, even on the easiest of five levels.