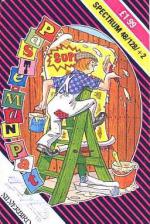 Pat Plop is the best billboard poster in 'Groovetown' (!?!). After a hard day's work, Pat has gone back to inspect the fruits of his labours, to find that a rival posterer has rearranged all his posters. Oh no, how dreadful! Luckily, Pat's paste never dries (!?!?!) and so restoring the posters to their former glory is simply a case of taking a horsehair brush and sliding them back into place. And that's the game.

It's based, very loosely, around the concept of the funny little sliding puzzles you used to get free from McDonalds if ever you held a birthday party there (at very reasonable cost too). You had a closed rectangle, inside which were a number of square sliding blocks, each with a portion of a picture on them. One block would be missing, which would leave enough room for you to slide a row or a column one space. It was by this method of sliding that you eventually rearranged the blocks and built up the picture.

In PP, rather than remove a block, the game goes beyond the realms of possibility and brings in a wraparound feature. For the uneducated this means that if in the course of sliding, a block comes off the bottom of the screen, it comes on again at the top. This doesn't make the game any easier, just a little different.

The first of the 16 levels is easy to do. After all, it's only split into four pieces. By the end level, however, the poster has successfully managed to split itself into 64 pieces, with only half of those on screen at a time.

Controls are simple. You view Pat from behind, as he sits atop his ladder which, by some marvellous feat of new technology, allows him to scroll around the billboard in eight directions. This he has to do for two reasons. One so that he can get to all the parts of the board and the second is so that he can avoid all the missiles (boots, bricks, etc) being thrown at him by the selfsame billboard poster that messed them up in the first place. Scrolling the sections of the poster is via pressing the fire button to activate Pat's brush arm, and then pressing a direction to make him use it.

If you want to know how well you're doing, you can call up a picture of how the poster should look when it's finished, and then compare it to how much you've done. This is done by, believe it or not, going to the lavvy. No, not by wazzing on the wall, as I'm sure some of you out there originally thought, but by having a look at the plans whilst sitting on the big white telephone.

Graphics are OKish. The scroll works quite well, but apart from that, there's not a lot else. Well, what can you say about a puzzle game?

Basically, a bit dull. Perhaps puzzle games are meant to be dull, though I doubt it. Even if they are, why bother writing one for a computer?

Fairly good. By any other standards, it's pretty dull.

Graphics are OKish but, basically, it's a bit dull. Perhaps puzzle games are meant to be dull, though I doubt it.