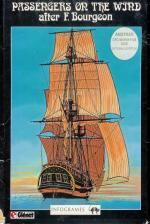 Passengers On The Wind

Passengers On The Wind, based on the award-winning French comic strip by Francois Bourgeon, is a vast, sweeping adventure set in the 18th century on the eve of the French Revolution, with settings ranging from England, France and Africa.

You play the part of a daring, idealistic heroine, a courageous Breton sailor, and a host of other characters.

The game starts easily enough, with a large, full-width picture, below which is a character window and a text window. I was quite impressed with the excellent graphics and colour, accompanied by music and sound effects.

You call up the various characters, get them to speak and, by getting the correct sequence, progress into the adventure.

It's the first time we've seen this type of operation and it can be a little confusing. The instruction could have been a little clearer. They read "...just by confirmation you can access the character you wish to play. For example, in scene one you can confirm..." Without explaining how to 'confirm', the instructions continue "...When this first search is over, you do not use the graphics section again."

Now this isn't too clear. Perhaps something went missing in the translation. Keith found this very annoying.

As a non-adventure player, Paul found the game much more enjoyable. "Instead of the seemingly impossible problem-solving which are the centre of most adventures, Passengers On The Wind involves you in just getting the right sequence of commands."

Keith's summing up: "I consider myself to be the very experienced in the operation of computer programs, especially games software, but this one had me beat. Eventually I turned to the complete solution provided for reviews, but how it was to be implemented remained a complete mystery."

Paul's verdict: "Passengers may not be the traditional type of adventure we're used to, but at least it's something new and a pointer to what could happen in the future."

Passengers On The Wind

Passengers On The Wind may not be the traditional type of adventure we're used to, but at least it's something new and a pointer to what could happen in the future.