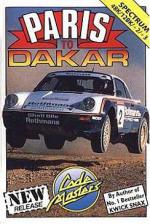 When the question "Who wants a dirty weekend in Paris?" was asked in the office, Nick Roberts was only too keen to oblige. What we didn't tell him was that it involved travelling down to Africa on a dirty road (Ha ha)!

Software companies seem to have seen the faults in their road racing games and attempted to rectify them. Take Paris To Dakar, for example. It gives the player the choice of three different vehicles to play with, and choice is what many earlier games were lacking.

The idea of the game is to race your chosen vehicle from Paris to Dakar, encountering various styles of road en route. You can choose to race on a motor bike, in a Metro (bizarre, isn't it?), or a truck. Each have different strengths and weaknesses and can cope better with certain types of terrain.

France is full of fast road action, Spain has rocky off-road racing and there are plenty of sand dunes to be jumped in the Sahara desert before you reach Dakar.

Along the route there are icons to collect which improve your vehicle's performance. Turbos send it into super speedy mode (and probably the nearest bush), wings make you stay in the air longer when you go over a ramp, fuel keeps the tanks stocked and damage decrease the damage-o-meter by 15 points.

As well as keeping your eyes on the road, the damage and fuel meters need to be monitored. If one of them falls to zero the game's over and you have to fly back to Paris in disgrace.

Just like author Lyndon Sharp's previous game, 750cc, the graphics are all in detailed monochrome and the game moves far too fast. Most of the time all you can see is a jumble of sprites: rocks, bushes and icons zoom all over the place at such speeds you'll probably run into a boulder and miss the icons altogether!

couldn't stand playing Paris to Dakar for long, there are much better race games about. It's not often said about a Spectrum game, but this is just too fast to be playable (can we try to keep to the speed limit next time, Lyndon?).

'Aaaargh! Where's me sun shades? I've gone blind! Y'see punters, the horrible stripey road effect on Paris to Dakar isn't too kind on the old peepers. I wouldn't mind so much if the game was a more playable but it's a very average racer. True, there's a choice of three vehicles to drive, but what's the point of even trying to get from A to B (or Paris to Dakar) if the road is so treacherous you invariably wreck your vehicle within 30 seconds? Apart from the moving objects, there are boulders strewn all across the track. It's very difficult to miss them and I've given up trying (I just plough straight through them). It's all too uncontrollable to be playable.

It's all too uncontrollable to be playable.