Published in Your Sinclair #74 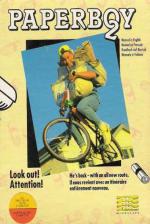 How many of you lovely peeps have, or used to have, a paper-round? Hmmm, so it would appear that approximately 50 percent of the population has been completely and utterly ripped off by newsagents who pay an absolutely pathetic wage to gullible kids and any other down and out unfortunates who find themselves suddenly in need of dosh. I mean come on, you get up at about five o'clock in the morning, rain or shine and proceed to spend about an hour and a half shoving weighty scandal-sheets through tiny letter-boxes for about 50p a day. Daylight robbery! Paper-people throw off your shackles and play this game instead. (You weren't ever a paperboy were you, Hutch? Linda.)

Yes,but that doesn't mean I'm bitter or anything. Anyway, what we have here is the follow-up to that ever-so-successful gamette Paperboy. In this revised version there's now a lovely red and yellow two on the box and ermm, some other tweaks to the gameplay.

You know the kind of thing. Spiced up graphics, improved sound, greater options; tweaks. In Paperboy 2, the man difference is largely cosmetic. You see, instead of just scrolling up the screen at an odd angle from bottom left to top right, Paperboy 2, scrolls from the bottom right to the top left as well. What this means is that instead of just delivering papers to one side of a street, you've got to cover both sides.

The idea of the game is to lob newspapers into peoples mailboxes. Get your timing wrong and the newspaper will smash a window, knock down a trash can, ruin a picket fence or even knock down a gravestone. If you're too generous with the newspapers, then for every stray object which you hit, you'll lose a certain amount of points. If you miss a house on your rounds, then they'll cancel their subscription. When everyone's cancelled, you're fired and it's time to put the bike back in the shed.

It might sound easy, but believe me it isn't. There are all sorts of suburban horrors waiting to knock you off your bike; kids in go-karts, men carrying pianos, trucks and cannonballs (no, really!) are just waiting to wipe that Golden Grahams smirk off your face.

Ah, yes. However, once you get terribly good at Paperboy 2, you can start having some real fun. For instance, in this particular cul-de-sac of suburbia there are jumps all over the place. Thus you can pedal like mad right across someone's front garden and perform a neat jump right over the fence into next door's prize purple begonias.

What's more, if you actually manage to survive both sides of a street, you get to attempt the assault course. This has got loads of bales of hay, targets and water jumps. However, if you make so much as one teensy-weensy mistake you finish the ride and don't get any bonus points.

Once your end of day score has been calculated, you can head off home to bed, lay your head down on the pillow and get some serious zzzs in. You see, you'll need a straight head for tomorrows exertions when you'll do exactly the same with more obstacles in the way and more houses to deliver to.

It's all a tremendous giggle. The graphics are groovy and there's very little colour clash. Your paperboy scrolls around pretty darned smoothly, even though a close-up of his crashes would have been nice. Sound's a tad mediocre, but then how do you make a paper round sound sound?

There are two problems with this game. Firstly the collision detection's absolutely crap. You can be peddling along nowhere near a hedge or anything and the game will suddenly decide you're doing far too well and stick a large stick into your front wheel's spokes.

Secondly, it's not that different to the original Paperboy. In fact, about the only substantial changes are that you can choose what sex your paper-person is and you also get to deliver to both sides of the street! Vehicles still emerge from side streets like they did in the original and kids still attack you on the pavements with go-karts. The odd new hazard has been bunged in for good effect. For instance a runaway horse comes belting out of a wood at one point and there's a house which dislikes you so much they lob cannonballs at you. Paperboy 2's a groovesome game, but it's more like Paperboy 1.3.

Pedalsome frolics in suburbia. Try before you buy.

It's a groovy game, but it's more like Paperboy 1.3 than a real continuation. Try before you buy.