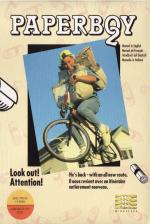 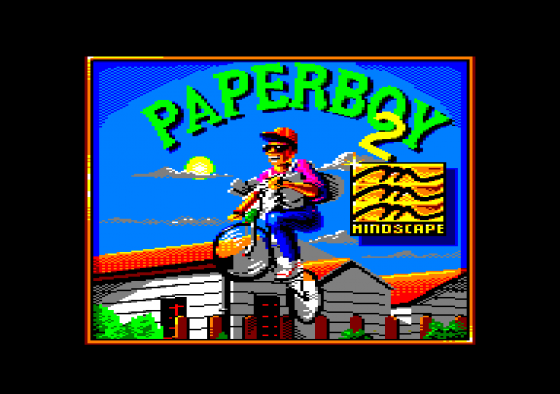 Let's be honest, this isn't the most glamorous of subjects for a computer game, is it? No disrespect to all our wonderful paperboys and papergirls (who do a terrific job, probably), but getting up at 7am and shoving the Daily Telegraph through someone's door hardly compares with being a Formula One driver or a Space Commando, does it?

Not to worry. Paperboy 2 is the sequel to the 1985 game, er, Paperboy. It's very similar indeed to the original. There's the same hazards, the same bonus (racetrack) bits etc. But the graphics have been improved, the gameplay tweaked, and, er, you can deliver to both sides of the road now. Oh, and you can choose to be a paper girl instead if you like. Hurrah! (But it's still called Paper'boy' though, isn't it?)

The action takes place across six days, Monday to Saturday. You get Sundays off (unlike supermarket staff). Before each day you get shown the cover of that morning's paper, the headline of which might have something to do with what's happening in the game (but then again, might not). 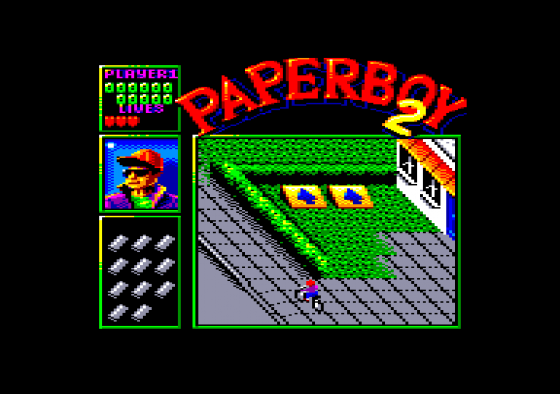 The delivery bit takes place in two halves (you deliver to each side of the street in turn), and before each half you get shown a plan of the houses, with the subscribers' homes indicated. These are the ones you need to deliver to. Then again, they're also the only ones with post boxes, so you'll have difficulty delivering to any of the others even if you want to.

If you miss any letter boxes, the house-holders are so incensed with your sloppiness that they cancel their subscriptions forthwith. Boo! If you manage to deliver to everyone on your round though, other people in the street see how fab you are and subscribe themselves. Hurrah!

There is a lot of bitter rivalry in the shadowy mafia-like world of newsagents (just kidding newsies - remember AA is distributed by Future Publishing and is available from your wholesaler). It's newsie-eat-newsie out there, and any paper peep who lets the side down is history. So lose all your subscribers and you're finished.

You've also got seven lives and you lose one each time you cycle into a wall (or similar). After the delivery bit you get a bonus thingie, where you cycle down a race track, jumping rivers and avoiding bollards (that's bollards), whilst chucking any undelivered papers at targety things. It doesn't matter much if you die on this bit (you don't lose a life). Once that's over you get docked points for any windows or walls you've smashed or splattered, and then progress to the next day.

If you survive the week you get promoted to a different street with nastier hazards (haunted graveyards instead of castles, etc). And you keep going on like that until you lose all your lives or subscribers. (Or until you finish it and win, presumably.)

The sprites are quite small and fiddly, and you don't need to hit a ramp dead on to jump, but collision detection isn't at all bad really (try shimmying through the bollards on the racetrack bit, for example). There's no sound, at least on the 464 version, apart from a little tune half way through loading.

Paperboy 2 is an updated version of a very old game which somehow seems in 1992 as good as anything else around. Any game that can keep you coming back for more like this one must have something rather special.

Top tip: Just select one or two houses you can deliver to easily (houses two and five on the right for instance) and don't bother with the rest. This is in fact the same tactic your reviewer used a few years ago when he did a real paper round [Yeah, and how long did you last, pray tell? - Ed] Er, two days. But that's not the point. Or maybe it is. Oh, I don't know.

What's the difference between this and the original? A good game is a good game, I suppose, but this one is a real blast from the past.

Get to the third street.

There's a lot of hazardsome things that cause problems for paper deliverers, both in real life and in the game. Here are a few of them:

Kerbs - In real life it's possible to cycle into these without coming a cropper (provided you get enough speed up). Try it in Paperboy 2 though, and you'll end up flat on your back whistling tunes from The Sound of Music. What a con, eh? I want my money back [What money? - Ed].

Hedges - Cycling into hedges is not really to be recommended in any circumstances. Try it for real and you'll end up covered in scratches and, worse still, creepy crawlies. Try it in the game and you'll lose a life.

Fences - If you cycle fast enough into a flimsy wooden fence you can probably knock it down (try it on a neighbour's fence sometime). Er, but not in the game though, that's just in real life. You'll have to jump them in the game, using those conveniently placed ramps.

Traffic - It's a sad fact of life that if a bike (even a spanky 21-gear mountain bike jobbie) goes up against an articulated lorry, the bike tends to come off worst. So be careful.

Runaway Prams - Aha. Hardly the most common of problems for paper peeps in the real world, but the cause of major amounts of swerving in this game. Try chucking a paper at them from the safety of the road. A good shot and a 'Paperboy Saves Baby' is the headline of the next day's paper. Aw shucks...

Delivery Men - These wander aimlessly out in front of you, the way that delivery men are trained to. But why are half the houses in the street having sofas delivered, and the other half window panes? (Actually, we can understand the window panes - our accuracy in the Guardian-bunging department being somewhat less than impressive.)

Bin Men - The indignity of it all. Knocked off your bike by a big black bag full of pizza boxes and empty beer cans. That's all bin bags ever contain isn't it? [No, it isn't Adam - Ed] Well it's all my bin bags ever contain. [Yes Adam we know - Ed] So what else do you get in bin bags then? [You'll find out if you don't get on with the review - Ed] Flipping flip, it's like Alcatraz here.

Savage Dogs - Evil killer rottweilers that bite off your leg, seriously impeding your cycling abilities in the process. Er, well actually they look more like little fluffy pekineses who couldn't bite the leg oft a thing with a very loose leg. But you'll still come a cropper if they pounce on you. Little gets.

Ghosts - Ghosts? Ghosts? Be serious. And who's that tall bloke in the black coat holding a scythe? Death? Right, yeah, like you get ghosts and horsemen of the apocalypse hanging round street corners when you're doing your paper round, eh kids? Happens all the time, doesn't it?

Cannon Balls - And castles too, eh? Hmm... we're none too sure about this bit.

Grab Factor 85%
Paperboy 2 is faster than your average cycling sim...

Overall 91%
Curiously addictive gameplay, and a nice change from the usual alien-blasting fare.

Curiously addictive gameplay, and a nice change from the usual alien-blasting fare. 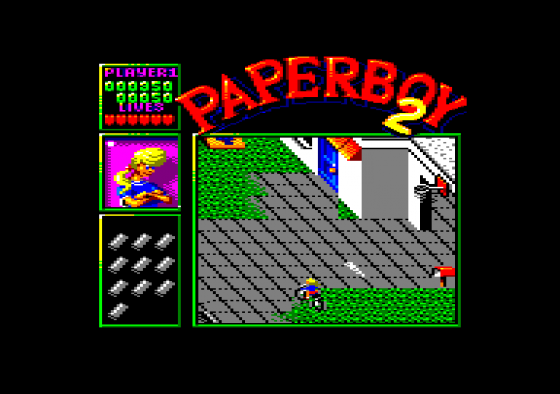