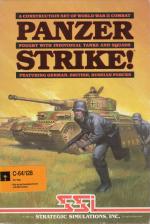 This is, without question, a game which is unlikely to appeal to players who do not have a military hardware fetish. Or, to be fairer, anyone with an interest in the mechanised warfare of the Second World War will find that Panzer Strike caters for that interest in a scientifically and historically exact way. Players who prefer planning campaigns on a larger scale, and whose imagination is kindled by the idea of rearranging history wholesale, are likely to be stunned by the huge quantities of technical detail reproduced in this simulation. It's a typical SSI tactical-level game, only more so than usual!

In this case, tactical-level means that the battles that Panzer Strike recreates are fought with units representing single tanks and small squads of men, on a map showing individual buildings, craters and trees. The game progresses in turns covering one minute of 'game time', and as the maximum number of turns in a single battle is 60, none of the encounters lasts for more than an hour. The variety of places and situations offered is admirable. There are three fronts or 'theatres' available - east, west and Africa - each occupying a disk side, and giving the player the opportunity to play preset scenarios or customised games. An exhaustive assortment of offensive vehicles appropriate to the time and the place is provided; the dozens of different tanks in the game are listed with their vital statistics in a substantial booklet separate from the main instruction manual.

The computer can play either Axis or Allied, or both or neither. There is an option to play with or without the 'limited command' rules, which simulate the fact that subsidiary units are not always in radio contact with their headquarters and in a position to receive orders. There is a simple handicap level adjustment and a message delay length to decide, before play starts.

The screen map is clear-cut and uncluttered, though minimalistic. It is not immediately obvious from its appearance that the game provides an unusually large variety of terrain types, including unexpected territory like wheat, olive trees and vegetation fire amongst the more common forests and roads, which affect movement and may or may not provide cover. This is summarised concisely in the Briefing Manual, but the player just has to use his imagination when trying to decide what on-screen graphic represents what type of vegetation.

Clear ground is patterned in dots, to make it easier to see how many grid squares it covers; this is a useful touch, as the range of weapons is measured in these squares and is vitally important when deciding on tactics.

Infantry units look like sealed envelopes (I have a suspicion that certain game designers consider this mysterious symbolism more sophisticated and serious than small drawings of soldiers with guns) and the tanks rather like door handles. Visually it is all very functional and businesslike.

The map can be viewed at the normal tactical level, showing a 20 x 10 square portion of the playing area, or at strategic level, which on most scenarios shows the whole map is useful for getting an overall picture of how the battle is progressing.

The gameplay is very simply arranged into two phases, orders and combat. The player spends as much time as he likes giving his units movement and firing orders, then watches passively as the orders are carried out in the combat phase. An unusual feature in the automatic running-on of combat phases: unless the player actively intervenes with a keypress at some point in the combat, the computer will run through the scenario's allotted number of phases without interruption.

Orders are given via a menu, crammed onto the bottom of the screen and fully explained in one of the manual's numerous charts. The map can be explored with a cursor, and the objective of the current scenario is always available for examination; the type of mission affects what the player gets victory points for, so that battles which end in apparent defeat can actually be judged quite successful in the circumstances.

Units are either vehicles or small squads of infantry, and they are all arranged into platoons. The units are identified alphanumerically in the game, so it is always clear which of them belong together and which of them serves as headquarters, the top of the chain of command; all units in the same platoon are referred to by the same letter, and the headquarters is number zero. Ultimately, all units on screen report on unit AO. The chain of command only becomes important, however, when the player has chosen to operate within the confines of the limited command rules. Without this option, all units are equally manipulable and the platoon system is merely a convenient way of ordering group movement.

Units have their own menu, which replaces the map menu when they are selected for attention. One of the most important options is the 'weapons' page, a screenful of information which gives details about the guns and armour of tanks, the state of morale, the unit's maximum speed and the number of men in attendance. Weapons are lovingly described in terms of their ammunition, size of shell, shell penetration value, accuracy, maximum range and infantry attack value, and tanks nearly always have more than one gun in their armoury. As far as I know, these statistics, and the differences between the various models of tanks, are historically accurate; the Briefing Manual often includes a short note about any features of interest, along with this alphanumerically bleak profile.

As I've already said: technofreaks will delight in poring over all this detail. It is reasonably easy for more simple-minded strategists to gloss over it in search of a good game, but not without a sneaking sense of missing something.

A formidable selection of orders can be given to units from the unit order menu, though the basic options are the usual 'fire' or 'move'. Units will automatically take pot-shots at anything that comes within a specified range, up to the maximum extent of their weapons' capacity, and they calculate their own target.

It is possible to check on what enemy unit a friendly unit has targetted, but not to alter it. The player's role in the attack is merely to arrange the most suitable forces in a position appropriate to the object, and to order the units to restrict their fire to the desired range. It is possible to specify movement exactly, so working out which units will attack what is not too difficult.

With a mathematical mind it is also possible to predict the probable outcome of the attack, for the complex combat rules - which are modified by every conceivable factor - are fully explained in the 'formulas' section of the rulebook. Studing the formulas gives the player the best chance of attacking and defending successfully, for he can work the precise advantage of positioning a certain kind of tank in soft cover, or ordering a unit to make a 'cautious' rather than a 'full' advance in conditions of poor visibility.

The combat phase itself takes place in three 'pulses', which serve to subdivide the fictional minute and sort out the units which fire first from those which are burdened by what the game mysteriously calls an 'administrative' delay. (It conjures up visions of officers filling in forms in triplicate before allowing their men to fire). While the computer makes its calculations it treats the player to a virtuoso display of random numbers, just to prove it hasn't frozen. When a unit fires, the screen scrolls to its target and the player is informed of the type of fire - mortar bombardment, rifle fire, or the classification number of the tank gun involved - its accuracy on this occasion, and, if the target is hit, the result. Most of the time, nothing happens; the accuracy rating of much of the firing is low. Attacking armoured vehicles with rifle fire is predictably pointless, for even if the tank is hit the bullets merely bounce off.

When a tank is successfully attacked, the location of the damage is specified, although it is possible for a unit to be completely destroyed by a lucky first hit. Infantry units suffer loss of men.

One defect of the combat phase is the fact that the attacking unit is not identified. Another is that it tends to be slow. There is an option to speed up or slow down the message display, but this is not a practical solution to the problem; speeding up the displays to the point where they become unreadable, or at least uncomfortable to keep up with, is a bad idea. It is the sheer number of messages which can cause the phase to drag, and most of these report on attacks which were unsuccessful.

There is much sound and fury signifying nothing. It is also rather too easy to forget to press the 'O' key and find oneself launched into another combat phase without a pause to give orders or assess the situation.

A full 60-turn game, taking advantage of every orders phase, lasts for a very long time and gives the player the chance to get lost in the detailed delights of small unit strategy.

I would reiterate that this is certainly a game which will only be fully appreciated by those with a specific interest in tanks and their historical use and construction, and though it does provide an acceptable small-unit battle-scale strategy game, the average wargamer is liable to be daunted by the sheer mass of technological data.

But it is hard to imagine a more comprehensive small unit simulation, and anyone who is interested in the subject will find this a thoroughly worthwhile purchase.

Graphics 61%
Functional and representational, but little care has been taken to make them look attractive.

Rules 91%
Exhaustive, with well-written and thorough descriptions of the game procedures and seemingly endless tables of statistics.

Playability 72%
The complexity of the rules hinders playability slightly - this is not a 'pick up your joystick and walk' game.

Overall 78%
Excellent for those with an interest in small-unit mechanised warfare.

This is a niche game, and it will only be fully appreciated by those with a specific interest in tanks and their historical use and construction... the average wargamer is liable to be daunted by the sheer mass of technological data.