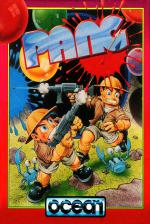 'Pang'. It's an odd word, isn't it? It sounds like the sort of thing you see inside speech bubbles in French comics. A bit like 'Paf!' and 'Aie!' - that kind of thing. Although its normally associated with hunger or maybe guilt. I looked this 'vaguely onomatopoeic' word up in my dictionary and it actually means "a sudden. sharp, brief pain". Quite apt, really, although playing Pang tends to induce more of a constant, dull pain somewhere in the depths of your stomach. It's maddeningly addictive, you see, and utterly unturnoffable.

So what's it all about, then? I'll try to explain. When the game starts there's a little bloke at the bottom of the screen - you. And, apart from that and a spooky background picture, the screen's completely empty. Oh, except for a giant bubble that is, just begging to be popped. Do so and it'll split into two smaller bubbles which float off in different directions. Burst those and they divide again. It's a bit like Asteroids, or whatever that arcade game was called, only different. Once the bubbles are small enough they disappear, and when they're all gone you've completed the screen. Good, eh? The only thing is that the bubbles are a bit on the dangerous side, so you'll die if you get touched by one. And as they move pretty fast this isn't entirely unlikely to happen.

But, in the interests of playing fair, you haven't actually got a gun to shoot with. Not at first anyway. Instead, when you press Fire a sort of rope thingy (for want of a better word) unwinds up the screen, bursting any bubbles that touch it. When it bursts a bubble, or hits any other obstruction, it vanishes and you get another shot. What's handy about this is that you can unwind it in the general path of a bubble and wait for it to float to its death, rather than having to worry about standing underneath and aiming carefully.

Further complication is caused on later levels by the appearance of platforms and ladders which, while being pretty useful for climbing up and down, tend to make the bubbles bounce around rather unpredictably. Luckily they can often be blown away to clear the air a bit.

And isn't there something we're forgetting here? Add-on weapons? Eh? There are loads of them, of course, ranging from lasers, through immunity, 'suspend-time' and double-fire to a weird pointy thing that looked quite impressive (but I died before I could pick it up). And there are bonuses too, in the form of bananas. All this stuff drops out of bubbles when you burst them, vaporising if you don't grab them quickly. Extra enjoyment is available via a two-player option which lets you and a friend take on the enemy simultaneously. Doing this usually means you can get through loads more levels, especially if you don't bring player two into the proceedings until later in the game.

Talking of levels, these are one thing Pang isn't short of. It's split up into 17 'countries', each of which has three or so screens with suitably scenic backgrounds. And, surprise surprise, they multiload in, but as I, erm, didn't quite get as far as the second load this didn't prove to be too much of a problem. Although the first few screens are merely tests of timing, later levels have sort of puzzle-type things to sort out (should you shoot out that block and release that bubble? Or would it be better to hang on for a bit and... ooops, run out of time - that sort of thing). And there might even be some more exciting baddies even later on in the game. Who knows?

As I've already mentioned, it's really very addictive indeed, combining all the best elements of 'cute' games. puzzle games and shoot-'em-ups. In fact, it's one of those games where tearing oneself away for long enough to do a review proves pretty impossible.

So what's the catch? Well, there isn't one, I'm happy to say. It's true that the collision detection isn't on your side, and games are often terminated to the cry of "It was nowhere near me! What a bast! I'm never playing this again, and I mean it this time!" but you soon come to accept its little quirks, Oh, and the music (mainly a remix of Puff The Magic Dragon, by the sound of it) is hardly compulsive listening. And it doesn't look earth-shatteringly good. But who cares. eh? At least you've got the tastily-drawn backgrounds to look at.

What we've got then is an absolute apricot of a game. The sort of thing that's so addictive if it stood on a street corner with a cigarette in its mouth it would be arrested for loitering with intent. It's also ripe for tipping, so I'll look forward to receiving lots of level-by-level diagramatic guides for Tipshop.

If you haven't already made up your mind, here's some help - buy it. Now.

A trouser-endangeringly addictive puzzley/shooty/cutesy game with lots of bubbles in.

A trouser-endangeringly addictive puzzley/shooty/cutesy game with lots of bubbles in.