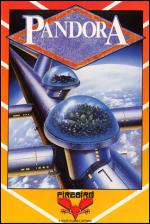 Not many games have combined the object-collecting, puzzle-solving, monster-fighting aspects of adventures with the animations, sound effects and graphics of arcade games. At least, not successfully, Pandora, though, may be the breakthrough, a joystick-driven arcade-adventure which should appeal to absolutely everyone.

For a start, the graphics are lovely, obviously more so on the 16-bit versions. The game is set on a complex space station, shown in a cut-away top-down view. The details are fascinating; sliding doors, panelled corridors, computer terminals, furniture and fittings of all kinds. Even more impressive are the characters, including yourself (an intergalactic salvage expert), and the surviving inhabitants of the space ark Pandora.

Somehow, most of the crew of the station have been killed; it's your job to make contact with the survivors, trade with them to obtain alien artefacts from Pandora's 200-year mission, and finally to shut down the computer and salvage the ship.

The first thing you discover is the importance of ID cards; the first character you meet on beaming aboard the ship disintegrates into a pile of bones, and unless you pick up her ID card, you'll go the same way.

One represents the contents of your backpack, one your pockets, and one the object you are holding. Objects such as ID cards, weapons, alien artefacts and trading objects can be transferred from one to the other by pressing the space bar to activate the inventory window.

Moving around the ship and encountering various characters, you will soon discover the use of many of the objects. The Diabetic, for instance, will give you a valuable artefact if you can give him a syringe. The Scientist will help you in return for a book, and so on.

Combat sequences (which are brilliantly animated) are played by watching an incrementing bar graph, then hitting the fire button just as it reaches its peak.

Force barriers which normally cook you can be deactivated if you carry the correct ID card. Similarly, computer terminals will give you vital clues if you log on with the right card. Some areas of the ship are inaccessible unless you have a security pass. Any objects you do not wish to use can be put in a chute which transfers them to your ship, increasing your score.

Certainly not a game you can expect to finish quickly, then. Fortunately, there's so much to see that there's not a chance of getting bored.

There's so much to see that there's not a chance of getting bored... It's certainly not a game you can expect to finish quickly.