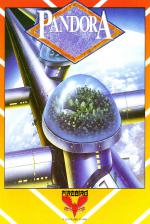 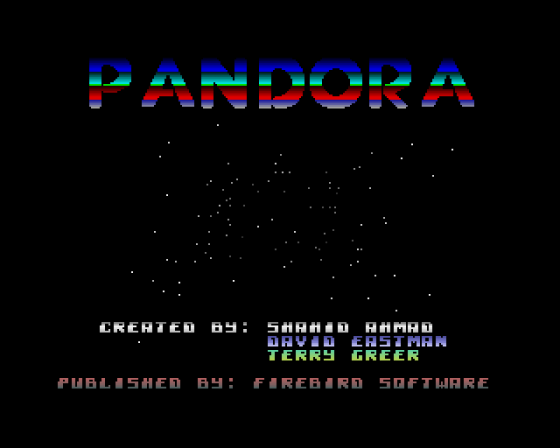 As the human race edged closer and closer to a nuclear suicide in the latter years of the twentieth century, the Maincore Computer Development research team joined forces with other European scientists to set up the Pandora project. Its purpose was to find new forms of life more intelligent than man and to apply their knowledge to attempt to patch up the problems of the human race.

Due to the expected length of the mission, the project called for a completely self-contained environment capable of maintaining life for a limitless period of time. For this reason, the research and design team developed the Pandora system, a seventh generation computer, to control the environment on the ship - also named Pandora - as well as the security systems.

The computer was fitted with an experimental component, Bio-Rhythmic Stabilisers, which could not be tested fully due to the alien conditions required to put the computer through its paces. It was suspected that if the Stabilisers were to malfunction, then the computer may express violent and aggressive tendencies. This was considered such a remote possibility that Pandora was fitted as it stood. 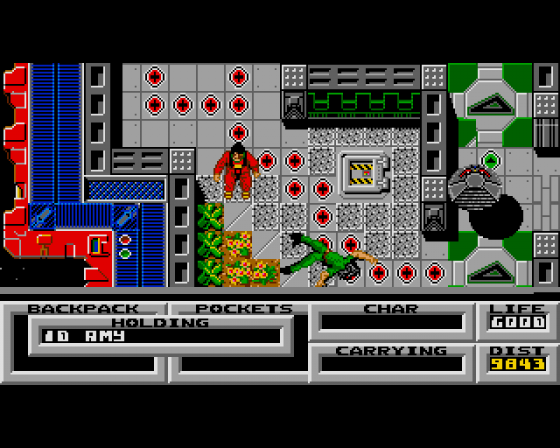 For decades after its launch, the ship Pandora was treated much like a foreign island, with its own nationals running their own system, the computer rather like the lord of the land. Only now, 200 years later, is it considered to be worth more than the usual amount of attention, because instead of maintaining its course the ship is on its way back to Earth, and it's in a hurry.

You play the part of an intergalactic salvage operator, who must board the Pandora and discover as much as possible about the situation on the ship and return as many artifacts as possible, so that scientists can discover what alien conditions caused the system to go wrong.

Fully equipped with chapel, private chambers and squash court, the ship is bursting with clues. Corpses litter the corridors and exploration reveals plenty of pretty peculiar objects (what are you supposed to do with a Mobian brain - I ask you?). 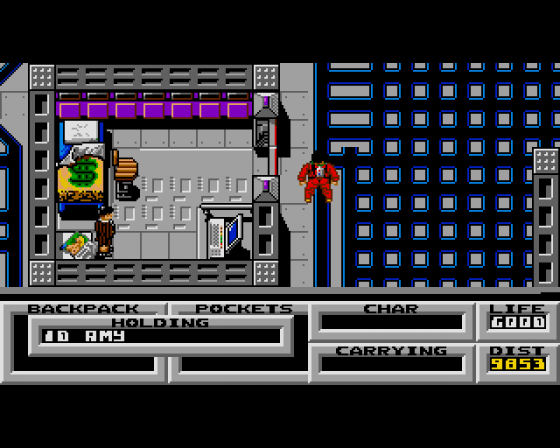 These humans still alive will usually want something. Provide them with the appropriate thingy and they'll usually give you some incredibly valuable present in return. Get too close to someone (droids included) when you're not carrying the right object, though, and, no questions asked, you're in the middle of a fight. Though you can control the power of your punches, unless you have a weapon, more often than not, you're likely to lose.

Survive all this and you just might make it back to the shuttle - I wouldn't bet on it, though.

I didn't expect to like Pandora, since the first phrase that usually springs to mind when I see this type of game is 'adventure-strategy game, ugh!'. But I must say I was pleasanty surprised to find it extremely playable and atmospheric.

It does require some thought (something I'm not particularly equipped for), but the puzzles arent as ambiguous as some 'serious' adventure games and the answers can be found quite easily.

The graphics portray the various characters and positions nicely, with some brill details like the priest's cape and the headbutting hooligan (although the markings on the squash court don't seem quite right).

Sound is used sparingly, but to good effect nonetheless - and the title music is of a very high standard. You don't usually see presentation and graphics of this standard in a strategy game, which makes Pandora stand out from the crowd.

Skinheads, maniac laughing thieves, mad musicians, solo squash players, priests in batman outfits, megalomaniac motor droids - you name it, Pandora's got it. Right from my very first go (in which I got completely flattened, by the way) I was hooked.

You can spend ages just wandering around exploring all the different rooms observing all the other peole - which is great 'cos most of them are ravin' mad. Once you've got into the puzzles you can forget about catching that latest episode of "That's My Dog" - you'll be playing, getting massacred and trading right through until old Rover's dinner time.

It could have done with a bit more sound and some less awkward push-scrolling, but apart from that I couldn't find anything to complain about. Shame - I was looking forward to a good gripe...

When this appeared on the C64 I found it less than enthralling, but the programmers have taken advantage of the Amiga's better graphics and enhanced the game with some very smart sprites and backdrops.

The Pandora's residents, though not particularly well animated, are all easily discernible and each has its own character. The punk struts around, sticking the nut on walls and causing fights, while the priest just stands there, looking mysterious with his cloak flapping in some supernatural breeze. The sad thing is, the basic gameplay is still more or less the same.

Meet one character, find out what they want, find the character who has what the last one wants, and on it goes. Let's fact it, if you were playing an adventure whose puzzles just consisted of object bartering you wouldn't find it terribly compelling. Still, because there is so much else going on, Pandora manages to get away with it and emerges as a game which provides a respectable level of entertainment, for a while at least.

Presentation 84%
Loads and loads of outstanding in-game features, but the scrolly messages are a tad too rapid.

Lastability 85%
...and with so many puzzles it's bound to last.

Overall 87%
A boxful of trucks, puzzles and entertainment, more absorbing than a Fiesta kitchen towel.

A boxful of trucks, puzzles and entertainment. 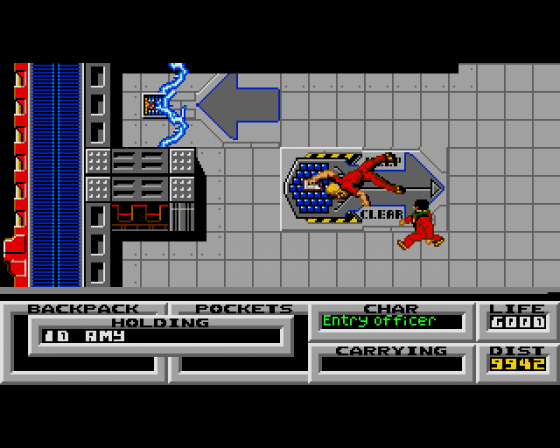