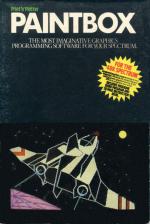 If you've ever tried to draw a high resolution picture with the bare and BASIC facilities of the Spectrum, you will probably want to investigate the appropriate tools and utilities which exist for this purpose. You have the choice of a hardware-based system using a light pen or a digital tracer with the required software routine/utility, or you can go for a less expensive software solution such as a graphics handling utility program.

Paintbox fits into the second category and covers all aspects of the Spectrum graphics. You may select between the cursor keys, cursor-controlled joystick of the Kempston joystick to use as a 'drawing-pen'. the program is menu driven and splits into two major functions - the UDG creation and handling, and the high resolution screen plotter.

UDG EDITOR The UDG Editor is excellent: it allows you to create four ti mes as many UDG's as there are in the normal Spectrum BASIC by storing in four banks of 21 UDG sets into memory, which can then be called selectively into the normal UDG area of the Spectrum.

The Editor allows you to view the UDG banks and to recall any of the four banks for editing. Selecting DRAWING BOARD will display the UDG bank, the UDG in magnified form, normally and inverted, and in actual size, and the deimal values for each line. You may call up a normal Spectrum character, an existing UDG character or a blank for editing purposes. Using the cursor keys/joystick and fire button, you can edit or completely redraw the UDG, and when finished, allocate it inside the UDG bank. In doing this, the inverse and rotate (4 x 90?) and mirror image facilities are very helpful.

Having created all the necessary UDG's you can save them on tape together with a machine code routine for manipulating them from BASIC, ready to be recalled in your own programs.

PRECISION PLOTTER The Precision Plotter Is the drawing tool for your high resolution pictures, and provides drawing facilities using the cursor keys/joystick with a constant display of the position co-ordinates.

Two moving speeds may be selected by use of the SHIFT key. All the drawing of Spectrum BASIC may be used including: Plot, Draw, Circle, Ink, Over, Copy, Save & Load. Selection of Paper Colour has been omitted from within the screen plotter quite deliberately to avoid the confusions which can arise from the low resolution colour map of the Spectrum (i.e. use of only 2 colours - ink & paper within the 8 x 8 character grid).

This user-protection may be overcome by breaking to the main menu and recalling the screen plotter, whereupon the new paper colour may be selected and the permanent memory screen recalled.

IN USE The UDG Editor and Screen Plotter may be combined by selecting Screen Planner from the Main Menu: all 84 UDG's may be drawn on screen with the high resolution screen as background. The low 'resolution print coordinates are displayed in this mode, and Ink & Paper colour may be changed. By constantly switching between Screen Planner and Prescision Plotter you can build up a picture within the li mits of your own Imagination and the Spectrum's li mited screen display.

The current UDG's may be expanded by loading previously stored UDG banks, thus increasing the amount of UDG's on screen. Throughout Precision Plotter and Screen Planner you may select to save your efforts to tape with a SCREEN$ display file save or with a normal memory file save, which includes the machine code routine for instant recall from BASIC (using RANDOMIZE USR 59980). The memory file, however, must be protected from the BASIC area by lowering RAMTOP to 53059 (with a CLEAR command). The data to screen dump routine may be amended so that multiple screen files may be stored and recalled.

The program proves to be very foolproof in as much that if the permanent memory does get corrupted, there is still the Erase Memory as a backup facility, so you don't risk losing hours of work. Nevertheless, it would be wise to save Intermediate results to tape for protection against brown or blackouts!

A commendable effort by Print 'n' Plotter - now if only the package included a pinch of artistic talent, I might be able to draw .. .

The program proves to be very foolproof in as much that if the permanent memory does get corrupted, there is still the Erase Memory as a backup facility, so you don't risk losing hours of work.