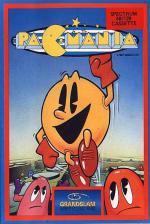 The Pacmania story started in 1982 when Bally Midway released an arcade game in which the player has to guide a little yellow blob, featureless save for a large mouth, around a maze and eat as many dots as possible while avoiding the attentions of four marauding ghosts. Public response was phenomenal - there has been nothing like it before or since - and within months you could buy PacMan watches, cuddly toys, clockwork toys, T-shirts, underwear, beach towels, mugs... You could even watch PacMan cartoons on TV and eat PacMan sweets! As PacMan fever swept across the globe, it seemed that the public had an appetite for PacMan products as insatiable as the little yellow fellow had for dots!!

Eager to follow up their success, Ms. PacMan was released. Basically more of the same, it was designed with the female gamesplayer in mind - although it's true to say that the original PacMan's non-violent game concept had already attracted many female players into the arcades, as well as those to whom shoot-'em-ups never appealed.

Next came Jnr. PacMan - another dot gobbler, this time with a scrolling screen - Baby PacMan, a mini pinball-type game, and a full-sized Mr and Mrs PacMan pinball machine. Since then there has also been Professor PacMan, PacMan Plus, Super PacMan, Pacland (a horizontally scrolling arcade adventure type game) and, bringing us bang up to date, Pacmania.

Grandslam recently bought the conversion rights to the latest installment of the PacMan series, and is set to release the game on all formats.

Pacmania is very similar to the original PacMan in the respect that the player guides Pac around a maze to collect all the dots, avoiding contact with ghosts. However, instead of a 2D static viewpoint, the game is seen in forced perspective 3D, with the maze scrolling as PacMan moves. He also has the ability to jump - useful, since there are far more ghosts rampaging around the maze.

At the start of a game the player selects one of three levels: Block Town, PacMan's Park or Sandbox, and the game begins. If either of the latter levels are chosen, a courage bonus is awarded when the first screen is completed: 50,000 and 100,000 points respectively.

The objective is simple - eat all the dots to move onto the next maze. Deadly ghosts wander around the maze and attempt to corner the yellow hero, and he can either attempt to avoid them entirely, jump over them, or head for the nearest power pill and be granted temporary invincibility. During this period, the ghosts turn blue and are destroyed if PacMan touches them. The supernatural horrors re-appear shortly after and continue the chase with renewed vigour.

Occasionally, a bonus fruit target appears in the middle of the maze and is picked up for bonus points. Sometimes this target takes the form of a special pill, which gives PacMan extra speed.

This is particularly useful if you can grab a power pill, as it allows you to track down and destroy large numbers of ghosts and boost your score!

There are four different maze designs in all: the three previously mentioned and the Jungly Steps, the largest of them all. As the player progresses, the going gets increasingly more difficult, with faster and more intelligent ghosts, some of whom are capable of jumping, thus neutralising PacMan's one advantage. Power pills also become less effective. When all four levels have been conquered, play starts again on the first, but the going is even harder... and so until all five lives are lost.

Although the PacMan theme is a very old and simplistic idea, Pacmania is enjoyable and highly addictive. It has a timeless appeal lacking in a lot of today's software, and is the sort of game that gets loaded months after it was first bought, just for a couple of quick goes.

The graphics and sound are very similar to the arcade machine, and the screen scrolls smoothly in all four directions - no meat feat for the ST!

So, if you're looking for a neat and appealling arcade conversion, give Pacmania a go; I doubt whether you'll be able to resist its charms.

If you're looking for a neat and appealing arcade conversion, give Pacmania a go; I doubt whether you'll be able to resist its charms.