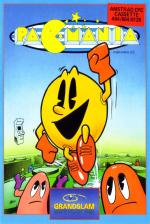 Way back when Carey was still a teenager [Eh sonny, what was that? - Ed], there was Pac-Man, an arcade game in which you controlled a ball with a happy smiling face (the ball, that is, not you) as it wandered around a maze eating pills and avoiding ghosts.

In the corners were power pills that allowed you to chase the ghosts and get your revenge. As with all successful arcade games there were sequels. Pac-Mania is the latest.

The major difference between Pac-Man and Mania is perspective: the former is viewed from above and the latter is 3D. Gameplay is the same: you go around the maze, collect the pills and then go onto the next maze. To the right of the four-way scrolling playing area is a score panel with your lives, score and a box to indicate special objects.

Besides pills and power pills there are occasional bonus items such as fruits for extra points or more useful speed up pills which make you move much faster (prunes? baked beans?). One thing that you can do in this and can't in 2D Pacman is jump over ghosts.

Colour is limited to two in the game itself, and while the graphics are simple, you'll have no problems working out what everything is. Vertical scrolling is fine, but the horizontal is jerky. Continuous tunes play on every maze and you also get the occasional sound effect.

Pac-Man has been around since way before the CPC and just changing it to a 3D game isn't enough. It's fun to play and should keep youngsters happy for a while, but you'll get bored before too long.

As with this month's Mastergame - I favoured Savage; Gary didn't: Gary won - opinions on this differ here in AA Mansions. Perhaps he's played just too much Pac-Man in his time, while I was elsewhere battling it out in Space Invaders (why hasn't anyone brought out a version with coloured plastic strips to stick to your screen?). I thought Pac-Mania not bad at all: smooth(-ish), lively, funny. Don't know what's wrong with that Gary at all...

Overall 63%
For younger readers only.

Old game with newish graphics. Pac-Man has been around since way before the CPC and just changing it to a 3D game isn't really enough.