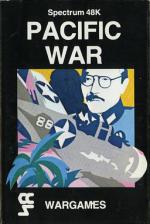 You control the American forces in the Battle of the Eastern Solomons, which took place during August 1942.

The Japanese, commanded by your Spectrum, intend to reinforce their troops on the island of Guadalcanal and you must destroy the Japanese task forces.

There are nine skill levels, and you can select the starting points of your task forces. On the map only your ships and aircraft are shown, so you must despatch search aircraft to find the enemy positions.

You can send out air strike forces by selecting the appropriate aircraft and their target position, remembering the ships may have moved by the time your aircraft reaches them.

You are also able to assign some of your fighters to Combat Air Patrol to help defend your ships. However, you are limited to three air missions per carrier.

After each game, turn the status of each task force is displayed and the score given.

An absorbing game, but I would have preferred more information on strategy and tactics.

An absorbing game, but I would have preferred more information on strategy and tactics.