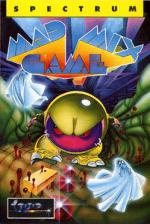 Pac-Mania | Psycho Pacman | Crazy Irishmen | To P Or Not To P?

Pick a Pacman! Calling a temporary truce to test out two variations on the arcade classic are the one-time YS lovebirds, Gwyn 'Ghost Gobbler' Hughes and Rachael 'Power Pills' Smith. Its amaze-ing how they'll make the peace for a few pounds.

Rachael: History time! First there was Pong, then came Space Invaders and Defender...

Gwyn: ...And then came Pacman!

Rachael: But games grew more elaborate. There was Elite and Lords Of Midnight and Driller and then...

Gwyn: ...And then came Pacman again!

Rachael: Yes, even though programming has reached the pinnacle of sophistication, there are still thrills to be found in the old faves. Witness the great Breakout revival which has arcaders busting their blocks in a zillion different ways (Remember YS's very own Batty?) Pacman was first of the maze games complete with all the collecting and dodging you could hope for and not an alien in sight. Pacman was different...

Gwyn: Yes Pacman was boring. I can remember typing in a version of the game on my ZX81 and regretting the time I'd wasted!

Rachael: Wha'! I You don't like little round hereos?

Gwyn: No, I think they're a load of balls.

Rachael: And what about mazes. You must like Hampton Court?

Gwyn: I don't know - I've never got my hampton caught!

Rachael: Gak, I can see this is going to be a bundle of fun. Load the first game, Maestro, and away we go...

Rachael: Yes, Pac-Mania is taking the country by storm as the big P goes crazy. Grandslam's official licence of the arcade machine is a classic conversion, complete with power pills which let you munch on ghosts, fruits to collect and weap around tunnels which take you and those pesky ectoplasms from one side of the maze to the other. But where Pac-Mania really differs is in its scenery. Instead of the old over the top 2D view you get a 3D view into the landscape, which scrolls smoothly around.

Pac-Mania starts in Block Town, an easy level to get your appetite going. Pacman's Park, which follows, is tougher. A tunnel means you're in more danger from ghosts popping up where you least expect them. By level three, Sandbox Land, things really are getting tough. The troublesome spooks can jump across the blocks to cut you off, and the tunnel is a dual carriageway affair. But the Jungly steps is the most spectacular landscape, a steep climb with lots of angry ghosts who will catch you unless you're very lucky and reach a power pill.

Though the game runs on 48K there's a bonus for 128K owners - the tape automatically discovers how much memory you've got and crams in a musical soundtrack if there's room...

Gwyn: It doesn't take machine code to tap my memory. I can remember a million games more interesting than this one. What the gormless tottie has failed to tell you is none of the levels is awesomely large. In fact they're pretty puny. Even the programmers seemed aware of this so once you've completed Pac Park for the first time, you have to do it all again before you move on. The same with successive levels. The whole thing is too easy and desperately dull.

Rachael: Not fair. You can go to any of the first three levels automatically, so you don't have to play the less challenging ones, and there's a nice 'credit' feature which sometimes gives you 10 seconds to return to the level you just lost, if you want.

Gwyn: Big deal - a free chance to prolong the tedium. You can send this one packaging, as far as I'm concerned!

Rachael: Crazy Irishmen - Mad Micks - Geddit! (Yes, and so will you if you crack any more like that! Ciaran) Mad Mix is not a Pacman game. Of course it features mazes, spheres to eat ghosts and the like, but that's not Pacman chasing - it's Pepsiman!

Pepsiland's landscapes are much more varied than Pacland's. There are one way systems which, when you get into them, drag you round until you've destroyed all their tiles, and trap doors to block off passageways. And somebody must have spiked Pepsi's soft drink with something psychadelic because Pepsiman keeps changing into other forms. 'Cos as well as the ghost-eating Angry Pepsiman there's the Pepsipotomus, a Pepsidigger and even a Pepsispaceship and Pepsitank which add a shoot 'em up element when you tread on the right squares.

And you'll need all the help you can get because there are several foes. As well as Ghosts there are Ladybothers, who create new spheres spheres where you've eaten them, and Repugnants, who can 'clamp' spheres and make them inedible, just like the repugnant traffic warden who clamped my motor last Saturday.

Gwyn: Of course he's not repugnant as this game. Sure there's more to do but the playability isn't as hot as it could be. The first round is so open-plan that you can't plan a proper course - the secret of success in all maze games. Things do look up in round two 'though, and round three is quite pretty!

Rachael: I'd tend to agree on the play balance, but once you get into it, Mad Mix probably has more lasting value.

Gwyn: If you mean it's sticky, like the soft drink it's been licensed from, you could be right. But I reckon too much of it would rot your teeth!

Gwyn: What can I say? Neither of these games is exactly a major contribution to computer science. In fact they're such a step back I'd like to lose both of them in a maze. Dull and repetitive, but if I had to choose, I'd say Pac-Mania has it on playability even 'though it may bore you to death with deja vu.

Rachael: Now that old misery guts has gone I can honestly say that it's good to see Pac back. Okay, so there are better games, but this is just the sort of simple entertainment that appeals to us simple souls. Hardened gamers probably will work their way through Pac-Mania more quickly so Mad Mix is probably their mega mix. However if you're a Pac purist you'd do well to go for the Grandslam game.

Pepsiman packs a fixx with some nice variations on a classic formula though the gameplay is less well balanced.

Pac-Mania | Psycho Pacman | Crazy Irishmen | To P Or Not To P?

Just the sort of simple entertainment that appeals to us simple souls.