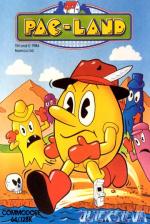 Do you believe in fairies? Pac-Man certainly does! One of them has got lost in Pac-Land, and being yellow in all except spirit, Pac-Man has decided to hide her under his hat and take her back to the far side of the island where the magic door to Fairyland awaits. The rough journey through towns, over mountains and across deserts is made even more dangerous by constant bedevilment from Pac's perennial foes, the ghosts, Blinky, Pinky, Inky and Clyde.

Pac-Land is played as a hozizontally scrolling platform game, with Pac able to walk, run and jump across the landscapes which traverse the screen from right to left. Scrolling towards Pac are hydrants, cacti and tree stumps, all of which are leapt over. Further on are more hazardous obstacles, such as moving platforms built from rolling logs, and long stretches of water which are jumped over using a joystick-waggling technique.

However, the real villains of the piece are the ghosts, who, though previously content just to stroll through mazes, now don't think twice about taking to swifter modes of transport to pursue their yellow quarry. A beeping noise warns of the imminent arrival of a spook behind the wheel of a large automobile, while a buzz from the skies heralds an incoming phantom plane, or at least, a phantom in a plane, who has no qualms about dropping bombs. These cause havoc with Pac's five lives, should they land on his trilby.

To help him through such heinous hazards, the rotund hero takes advantage of that panacea of past adventures, the power pill. These are scattered around Pac-Land just waiting to be picked up, whereupon any ghosts on the screen turn to a quivering blue mass, ready to be biffed for bonus points. Other edible goodies are fruits which appear when parts of the landscape are touched, also yielding bonus points.

As Pac-Man runs through each level, his energy, represented by a bar of withering Pac-Men, gradually diminishes in size. When it runs out he is beset relentlessly by the ghosts and a life is swiftly lost. If he reaches the end of the level before this happens, the fairy comes out from under Pac's hat for some fresh air, and to award bonus points based on the amount of energy he has left.

Once Pac reaches Fairyland, he releases his fairy friend and the Fairy Queen appears to reward his efforts with a pair of flying shoes. Thus equipped, Pac begins his journey home where his wife and baby await to salute his brave deed. Unfortunately, another fairy has fallen through the magic door and, well, how can you refuse to help a fairy?

The appeal of Pac-Land lies entirely with its cute characters and colourful backdrops. The gameplay has a child-like simplicity which is immediately appealing rather than tedious: this uncomplicated action is echoed by the basic, appropriately jovial soundtrack jollying along in the background (which could ultimately prove annoying to some, however).

The presentation is very good, with an (albeit totally redundant) credits system, inter-stage sequences and end-of-level pieces which are typical of the game's neat additional touches. Visually it's as good as it should be, considering the simplicity of the graphics; even so, they attain a high cartoon quality standard throughout.

Although the scenario appears to be twee, the game demands the usual arcade skills: it's easy enough at first, with little action apart from bouncing and avoiding your opponents on the ground and in the air, but the further you progress the more your dexterity is tested, ending in fierce waggling sessions and the need for precise timing.

This may be getting on a bit, but it's been translated well enough to be deserving of any Commodore owner's attention.

I'm ashamed to admit that I missed Pac-Land in the arcades, and judging by this conversion I missed out on something special! Uncluttered gameplay allows you to get straight into the action, and this simplicity doesn't detract from long term addiction at all.

The cartoon-style graphics (which even have Pac's expression change as he is forced to put on a burst of speed), jolly tunes, hidden bonuses and even a credits system, give the game that essential arcade feel. The level of difficulty is well graded, and Pac-Land affords an enormous challenge on the later trips which have, amongst other hazards, enormous takes whch have your joystick wiggling hand feeling like it's on someone else's wrist.

There's little else I can say, except that Pac-Land is the best arcade conversion I've seen since Buggy Boy. The only thing missing is the coin slot!

This is one of those games that's childishly simple, but fiendishly addictive. From the outset, Pac-Land's straightforward scrolling platform-style action proves very compelling, and I for one found it very difficult to tear myself away from the computer once I'd started to play.

The amazing attention to detail paid to this conversion shouldn't go unsung, from the indistinguishable character set, through the incredibly faithful soundtrack and jingles to the identical gameplay - the programmers have miraculously crammed an entire Pac-Land machine into the C64.

Pac-Land is a fabulous game, and is by far the best arcade conversion to appear this year - don't miss it.

Presentation 81%
Arcade-like, insofar as there is a credits system, no restart key and a two-player mode.

Overall 92%
All the best features of the arcade game make this a superb conversion.

All the best features of the arcade game make this a superb conversion.