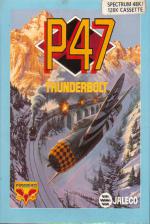 Neerrrrowwwww! Kaa BOOOOOM! Tally Ho chaps and yoiks. You can have more destructive power at your command than Johnny Fartpants on a vindaloo crawl in this latest conversion of a Jaleco coin-op where you find yourself at the controls of a P47 Thunderbolt, the fastest and biggest single seater fighter/bomber of World War II.

It was sooo big that Gabby Gabreski, America's highest scoring ace pilot of the war, said that the best way to take evasive action in a P47 was to undo your straps and run around the cockpit!

Convinced? Well all of you who've seen the arcade will be relieved to know that P47 follows the same formation as its big brother. After having defined the keys or joystick movements (clever stuff that) and confirmed them, it's on with the flying jacket, stick a piece of gum in your mouth and take off. You fly from west to east and the general brief is to blast anything that moves. Enemy planes will appear and disappear as soon as a well aimed volley rips it's cockpit out (oo-er!). Destroy any helicopters that appear and they will leave icons that either add bombs, multi-missiles, speed ups, spray missiles, directable fire or an extra life, most of which weren't available on the original but then this is no simulator, it a straight forward blast 'em to hell.

Eight levels of action takes your plane through northern France, Africa and even above the clear skies of the Med, where you must bomb tanks and with an end of level nasty that can either be tanks, battleships or even bigger tanks. All of which adds up to a game that whilst is graphically very good (especially with its colour on colour off option), remains a shoot 'em up that is very playable and looks and feels very much like Silkworm - with the helicopter replaced by, a P47 Thundercat.

JIM SEZ: Just like Scramble circa 1943. Lots of action but nothing new.

A clean conversion of an average coin-op. Low on skill but high on kill.

A clean conversion of an average coin-op. Low on skill but high on kill.