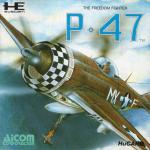 Is it a bird? Is it a plane? Oh darn, you only needed two guesses. Yes, the P-47 in the title is a plane - a World War Two fighter winging its horizontal, parallax-scrolling way over Nazi Germany, seeking to bring down the combined air, naval and artillery forces of the Third Reich single-handedly. Not an easy task you might think, and you'd be right.

You start the game armed only with a piddly forward-firing machine gun, which is fine for some of your punier enemies which only need one shot before they explode into a ball of flame, but there are sturdier foes around which require multiple hits before they go down. What you need are... surprise, surprise... better weapons, and these appear amongst blasted wreckage in collectable pods.

Letters on the pods indicate the add-on inside them. Add to your armoury with speed-ups, bombs, spread rockets or directional firepower, and prolong the game with the odd extra life.

At the end of each stage there's the usual mega-nasty to deal with. In the case of P-47, there are impressive Luftwaffe bombers and giant Panzer tanks which bombard you with all their might until you pump several dozen rounds of ammunition into them. These guys are horrendously tough to destroy, and just surviving their barrage of fire requires lightning reflexes.

Indeed, throughout the game, the odds seem quite heavily stacked against the player, and even the extra weapons don't help things as much as I would like. So, gaming novices be warned - it's going to take an awful lot of practice (and probably an auto-fire joypad) just to get onto the third stage.

A very tough arcade conversion, but veterans of computer wars past should find P-47's good blasting action both addictive and challenging.

A very tough arcade conversion, but veterans of computer wars past should find P-47's good blasting action both addictive and challenging.