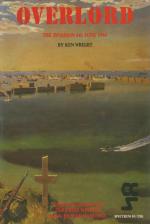 Ironically I am polishing off this review on 8th May - which, as the historians among Your Sinclair's readers will know is the 43rd anniversary of VE Day, the day the Germans finally surrendered to the Allied forces, so bringing the war in Europe to a close. If the 8th May was the grand finale in the European theatre of war, then 6th June 1944 - just over 11 months before - was the beginning of the final act. It was on that day - the 44th anniversary of which will have passed by the time you read this - that the British and American forces finally landed in Normandy, to open the Second Front.

Now, CCS - known for the excellence of its strategy games - gives you the chance to command the invasion forces as you re-fight Operation Overlord. As you pit your wits against Rommel - soon to be forced to take poison by the Gestapo after being implicated in the July 24th plot to assassinate Hitler - you have a momentous choice.

Do you follow the plans made by Eisenhower and the Allied Chiefs of Staff? Do you land on the beaches the invasion forces really landed on - Sword, Juno, Gold, Omaha and Utah, still marked to this day by the wreckage of 44 years ago - or do you think you can do better? Perhaps a landing in force around Cherbourg would mean that you could get your troops ashore with ease, and it would give you a major port: but then, the German forces could easily seal off the neck of the penninsula, denying you access to the open land beyond, and forcing your armour to fight in unfavourable terrain. Or should you land further to the east, much closer to Paris - but also in an area with much heavier defences, and closer to German reinforcements? Do you use your airborne units to protect the flanks of your invasion - which would be historically accurate - or should you reserve them, to be used either as ordinary ground troops, or dropped later when they might tip the balance at a vital moment? Life's not easy commanding the invasion of Europe!

It's a lot easier, however, playing CCS's version, than it would be commanding the real thing. Overlord is a one player war game - which I personally prefer, as I have never understood the point of two player computer war games. You the player control the disposition and movement of the Allied invasion forces. The computer plays the Germans.

The first choice you have to make is to decide what difficulty level you want to set the game at. There are three, with one being the easiest and three the hardest. I chose level one for my first game, but still managed to completely mess things up.

You decide which of your divisions are landing on which beach. There are 12 beaches to choose from, the historical five plus another seven which the allies might have chosen. You can land on five of the 12 beaches and as you do so, markers appear on the map window, indicating where the landing areas are. It's not a good idea to spread your landing areas out too much, as your forces won't be able to support each other efficiently.

Once you've picked the beaches, you have to decide which division will land on each one - although you could decide to land units from the same division on different beaches. But again, this is not really a good idea unless the beaches are very close to each other, because if you scatter the parts of your divisions too far apart, they will not be able to fight at their best.

You can land one unit on a particular beach at a time; and, in the first turn, you may only land rifle units. The heavier troops, artillery and armour, have to wait until later. Once you've picked who goes where, you then get a chance to land your airborne forces. You have to land them within three squares of a landing beach which is being used by the division they are a part of, so you can't parachute into gay Paris on the first turn. You should probably use them to attack the enemy forces closest to the landing beaches, to stop them from counter-attacking your troops on the sand.

Once you've started landing your units, it is important to get them off the beaches as fast as you can. You can only bring in new units if the beach-head is clear, so you must start off by creating a protective perimeter around your landing areas. Once you have the bulk of your forces ashore, you can then start expanding the beach-head and trying to break-through the defending Germans. At first, it will be a war of attrition; but once you have ground down the enemy, gaps should start appearing in his lines and you should be able to punch through.

Ordering your units is simplicity itself. Simply give them an objective to make for, and tell them where you want the division's left and right flanks to be. I would have preferred an extra option, giving you the ability to order individual units, but I accept that the way the game works now is a very good simulation of real warfare, within the restrictions of the memory of a 48K Spectrum. You also have to tell your forces what to do if they run into the enemy. You can either attack, defend, or use your initiative. If you attack, then you will do more damage to the enemy, but also suffer more casualties.

And that is basically it. The mechanics of the game are sufficiently simple for the player to be able to devote his time to the real challenge, the strategic decision making. And challenging it is - working out the right way to winkle the Germans out of their defensive positions without exposing your own troops, is a fine art.

I only have two criticisms. First of all, nowhere in the rule book does it tell your what the symbols on the unit counters actually stand for. I can work it out, but then I have been a wargamer and military history buff for a long time now. But it would probably have been useful for a beginner if the unit symbols had been identified.

Also, I found it very difficult to tell my left from my right - or rather, my units' left from their rights. This is not because of any personal problem with orientation, but because it is never made clear whether left and right refer to the player's left and right, or the units'. As the player is facing in the opposite direction to the units he controls , it can be confusing.

Quibbles apart, Overlord is an excellent game. It offers hours of challenging entertainment, and could even teach some history at the same time (though I wouldn't be too put off by that!). Another winner from CCS.

An excellent game. It offers hours of challenging entertainment, and could even teach some history at the same time.