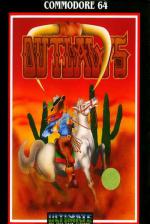 'Many years ago rode a band of men. They came from the East of the desert and with them they brought terror and destruction. Nobody was safe from the perils of a merciless death, no family was complete, no man was free...'

And so the scenario is set for Outlaws, the latest offering from Ultimate. You play Lone Rider, the Commodore equivalent of John Wayne, who, in truly heroic style, has to ride into the Outlaw area and eradicate the undesirable elements.

Outlaws is an arcade game which takes place over a two-way horizontally scrolling landscape. Your character sits on his trusty 'hoss' and can trot left or right over the landscape. Occasionally a fence, rock or broken branch comes into view. You can make your horse jump the barrier by pushing up on the joystick; if you don't, then the horse refuses and you fall off. The player has plenty of control over Lone Rider - he can duck in the saddle and fire his guns in eight directions.

The game has three different types of screens: the Outlands, Indian Territory and the Town. The first screen, the Outlands, puts you in the desert. You have to ride up lo the baddies' hideout and shoot them all as they lean out of the window. This is quite tricky, since bullets fly in all directions as you make repeated rides past the hideout.

If you manage to shoot all those critters, then it's a ride through Indian Territory to the town where more baddies are massacring the honest townsfolk. The Indian Territory has loads of obstacles which have to be jumped, and other hazards besides. Tumbleweeds trundle across the dusty landscapes and these have to be jumped. Also, the occasional crow makes a down-swoop at the hero - if he's touched twice then he loses one of his five lives. Indians ride along in the distance and fire arrows, although they're rarely on target.

If you manage to get through Indian Territory then you enter the Town scene. Here a specified number of outlaws (five on the first level, ten on the second, etc) are running riot through the town, merrily slaughtering the inhabitants. What you have to do is trot up and down the main street and kill them all before they successfully bring the town's population down to zero. This isn't as easy as it sounds since the baddies tend to mingle with the crowds walking along the street and it's easy to shoot the wrong person.

If you manage to kill the remaining Outlaws, then you are given a points bonus for the amount of people left in the town and you start on the first screen again, only this time it's harder, with more Outlaws and obstacles.

Yet another typically Ultimate creation; nice graphics, nice sound and absolutely awful gameplay. The only real saving grace of Outlaws is that it isn't quite as bad as Imhotep. As usual there's the ubiquitous expanded and blocky sprites making up the main player. The music is very mundane and annoyingly fades as you hit fire to start. There really is nothing much to say about Outlaws except for how mediocre it is. Ultimate will really have to pull their act together if they wish lo compete with other software producers in this price range.

Outlaws is very "Ultimatesque" in every way. The graphics look very similar to previous offerings, with porky sprites and the same scrolling technique. The same applies to music and sound FX, and they could have quite easily come off almost any other Ultimate 64 game, despite Wild West overtones. Having said that, I do like the animation on the horses - very realistic. Thankfully, Outlaws isn't as bad as Ultimate's last release, Imhotep, bus it still fails to make the grade, offering only three situations, and all of them very 'samey'.

Ultimate seem to have reached the depths of their slump and have released a program which is infinitely better than last month's disaster Imhotep. Outlaws is a brave attempt at an unusual arcade game which, although being limited, is fresh and highly playable. The graphics are very crisp, pretty, and scroll very smoothly, and the sprites are clearly recognisable as coming from an Ultimate game. The sound is okay, although some of the effects have been lifted from some of the Arthur Pendragon games. It's nice to see Ultimate back on the road to recovery - if things continue to improve, they could well find themselves becoming thought of as a great software house again.

Presentation 67%
Some useful options and an attractive screen layout.

Hookability 53%
Initially interesting and quite jolly to play.

Lastability 33%
Not enough variety and action to grab you for long.

Value For Money 31%
If Ultimate continue releasing products below their usual standard, then they should at least price them accordingly.

Generally a dull game... If Ultimate continue releasing products below their usual standard, then they should at least price them accordingly.