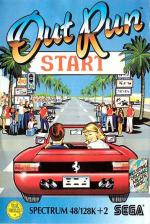 After what must be of the longest and most nail-biting build-ups in the history of computer games, my most favouritest arcade game ever finally been crammed into our rubbery buddy's miniscule memory. Has it survived the operation intact? Read on and see folks...

Out Run the arcade machine, places you in the driving seat of an open-topped Ferrari Testarossa with a stunning blonde in the passenger seat (ladies have to pretend it's a right-hand-drive vehicle), the idea being to negotiate a series courses as quickly as possible.

As you probably already know the YS mega-preview a while ago, every effort has been made by the programmers, Probe Software, to reproduce the original in full. And by heck have they made a good job of it. Obviously the pneumatic bits 'n' pieces and the jiggling steering wheel have had to go, but graphically it's all there.

In fact, the graphics are excellently drawn and true to the original, if a little on the monochromatic side. There's even a copy of the arcade version's cool 'n' groovy soundtrack thrown in for you to listen to on your Walkman as you play (or, indeed, review).

Like most things these days, it's a multi-load job. Every time you complete a stage you'll have to load the next in, but the 128K seems to store them as they load in, so next time round they're still there. All the same, the enormous amounts of rewinding and fast forwarding do spoil the fun a bit.

The one big snag, though, is the speed. It's to be expected really, but everything moves at a pretty sedate pace, and when you get to the bit with the stone tunnels, the whole thing slows down to the speed of a Commodore owner's brain waves. This doesn't actually affect the gameplay too badly, but you're constantly aware that you're playing around with five and a half year-old technology.

In most respects this is a superb conversion, despite the fact that US Gold may have been trying to achieve a bit too much in the first place. It's a shame that even the awesome power of the Speccy wasn't quite enough to pull it off.

Almost but not quite a brilliant conversion of the totally wonderful arcade machine.

In most respects this is a superb conversion... But it's a shame that even the awesome power of the Speccy wasn't quite enough to pull it all off.