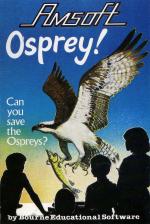 Based on factual events surrounding the magnificent osprey, this is a strategy game for YOunger players.

The Royal Society for the Protection of Birds has engaged wardens at Loch Garten on Speyside since the mid-1950s, when for the first time in half a century two of these birds were seen nesting.

Now, after 30 years' vigilance there are about two dozen pairs and the numbers are slowly increasing. Accompanying the software is a 30-page colour booklet giving a more detailed history of events leading up to the return of the osprey to Scotland.

In attempting to do even better than the RSPB, your responsibility is in deploying a varying number of wardens in the most effective manner. Most harm and damage is caused by egg thieves and noisy motorists; an important part of the strategy involves educating the public to an awareness of these problems.

The main screen displays are used alternately. The first one is entirely textual, giving the status quo both at the beginning and end of each season.

Though unsophisticated, the graphics screens are bright and clear. A view of Loch Garten is shown, along with the car parks, wardens nad egg theives, who are seen pilfering at night. A daytime view shows the osprey in flight and diving for fish.

Another worthwhile program from Bourne Educational Software, marketed by Amsoft.

Another worthwhile program from Bourne Educational Software, marketed by Amsoft.