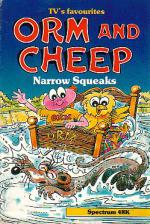 I must confess that I'd never heard of Orm and Cheep before these programs landed on my desk. The publicity handouts, however, informed me that Orm (a worm) and Cheep (a yellow bird of some sort) are well-loved cartoon characters from a TV programme 'watched by 72% of the 415 viewing audience'. Both games are marketed as being suitable for ' kids of all ages a very misleading statement. I know it can be very difficult to categorise games into neat age ranges, but what on earth are 'kids of all ages'? The handout, in fact, claims that 'whether you are 6, 16 or 60 you'll find Orm and Cheep a lot of fun'. Not being any of these ages myself (no, I'm not telling you how old I am?) I invited some kids ranging from 5 to 14 years of age, to look at the programs with me.

Both Narrow Squeaks and The Birthday Party begin with a reaction tester to set the level of play. The words 'Orm and Cheep' drop, one by one, towards a horizontal line and the player has to press a key to stop them as near to the line as possible. Having thus set the starting level, the difficulty of the game adjusts according to the player's skill. Narrow Squeaks contains four games, and I'm afraid we found them all totally boring and pointless. The instructions are extremely difficult to find for a start (they are hidden away in the text describing the game) and the children certainly had a lot of difficulty working out what to do as the explanations, once you have found them, are far from adequate. The objective in each game turns out to be surprisingly simple and totally uninspiring.

The Birthday Party is described as 'a compelling graphic adventure' but it can hardly be said to fit into the adventure game genre and we definitely didn't find it 'compelling'. The idea is to move Cheep around the countryside to find animals invited to Orm's birthday party, and accompany them safely to the party having outwitted the enemy on the way. We found the noise of Cheep flapping his wings particularly irritating as the game progressed and there is no facility for turning off the sound!

The graphics in both programs are quite nice, but I'm afraid that's the only positive thing I can say. These Orm and Cheep games got a definite thumbs down from all the testers, with the five year old saying they were the worst programs he'd seen. One parent, in fact, told me that if he'd bought the games for his children, he'd have returned them to the shop and tried to get his money back! 'Absolutely awful' just about sums them up!

Control keys: any key, which keeps the game simple for the very young child
Joystick: not applicable
Keyboard play: responsive
Use of colour: bright and attractive
Graphics: appealing
Sound: maddening, and impossible to switch off
Skill levels: adjusted automatically

Both Orm And Cheep games got a definite thumbs down from all children who tested them. One five year old said they were the worst programs he'd seen.