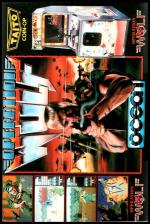 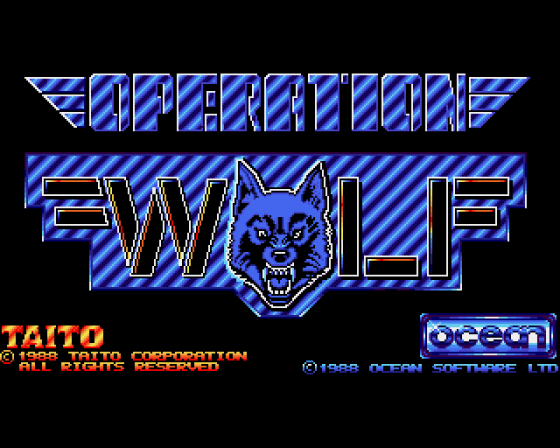 You've heard the phrase, haven't you? "Have machine gun, will shoot the hell out of things". No? Oh well, suit yourself...

In Operation Wolf, that's exactly what you must do. Rebel troops have set up a dedicated fighting force spread over the continent, ready to spread their forces by way of invasion of your homeland (ooh, the horror!). It's up to you to put a stop to it (well, that's what you joined the army for, isn't it?).

Armed with an Uzi sub-machine gun, you must fight your way through six stages of enemy-filled territories, beginning with the communications camp, which must be shut down in order to confuse all future enemy movement. 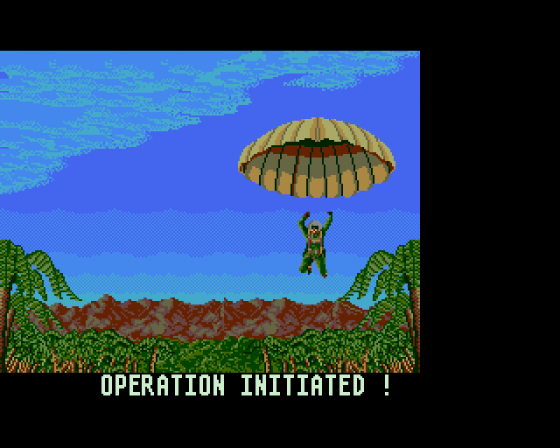 To do this however, you must wipe out the enemy inhabitants, as they won't just sit and watch as you plant explosives all over the place!

Next comes the jungle, with armoured cars and snipers galore, leading onto other stages such as the village, concentration camp and airport.

No problem, eh? Well, the thing is you're all alone. There's no back-up. You have to survive on what ammunition you have - along with any magazines and rockets you can pick up on the way. Should you receive too many hits from enemy weapons, your body-armour will give way and you will sustain a "lethal injury" - in other words, you'll croak. Oh, and another thing, watch out for the hostages! They don't like being shot at. 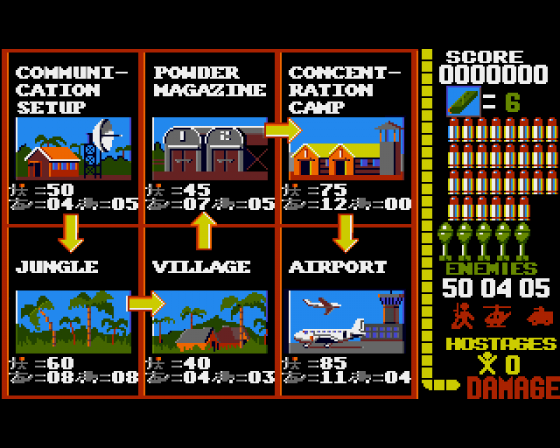 Well, I must say I'm disappointed. After the brilliant C64 version of Operation Wolf I was expecting great things of the Amiga version. What I wasn't expecting was one of the worst Amiga multi-loads I've ever seen.

I mean, disk swapping?! On an arcade game?! Aaaargh! The actual game sections aren't that great, either; sure, the graphics are nice and the sound is realistic, but what difference does it make when the gameplay's a bit on the boring side?

Maybe I'd have been playing longer if it didn't take so long to get to the game sections. It was actually quicker to reset the machine and start again rather than wait to get through the highscore table! 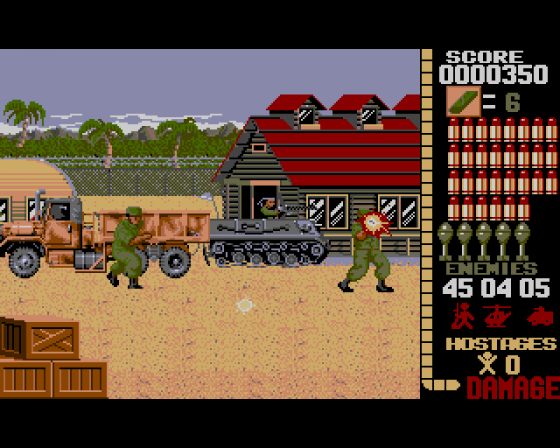 Operation Wolf should have been a helluva lot better, especially considering the strength of the C64 version showed that it wasn't just a set of pretty graphics, but had a playable game in there!

The first thing that struck me about Operation Wolf was the incredible length of time that it took to actually get going.

The title screen loaded, the music played, the credits appeared, the music stopped and it still wasn't ready! 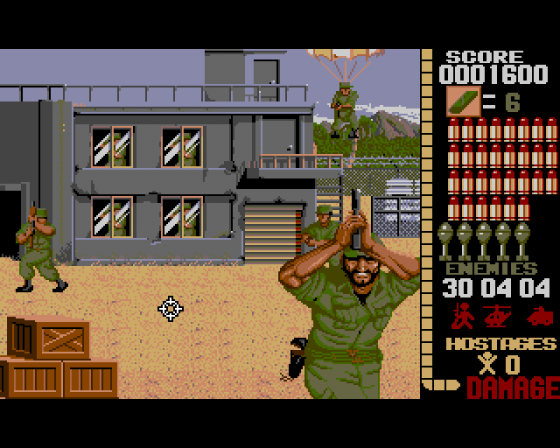 When it finally started I can't admit to being overkeen on the control, as the bullets hardly ever seem to hit what you aim at. They seem to be more content to wander off and hit something else - like a hostage!

The graphics and sound are very good, though, with large, colourful sprites and sampled effects, but when the game is filled with such long delays due to the awful multi-load then it hardly seems worth it.

Presentation 40%
Nice intermissions, but the terrible multi-load ruins them.

Graphics 88%
Large, well-drawn sprites and backdrops, but sometimes the colours are a bit weird.

Hookability 70%
Playable enough, but the annoying delays make it slow-going as soon as you start...

Lastability 57%
...and they make it a daunting prospect to return to the game.

A disappointing Amiga conversion... Graphics and sound are very good with large, colourful sprites and sampled effects, but the long delays (due to the awful multi-load) make it barely worth playing. 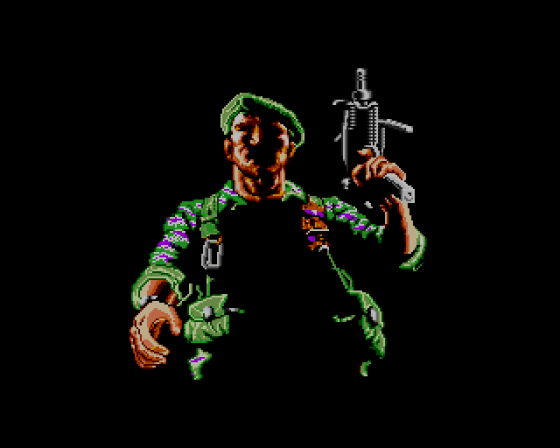 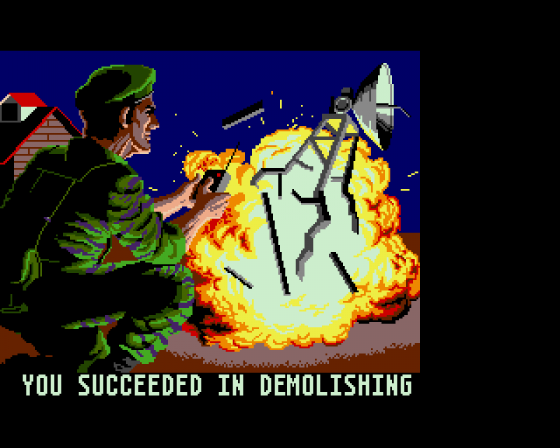 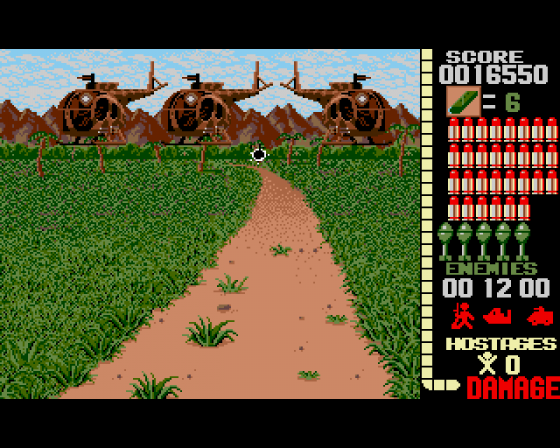 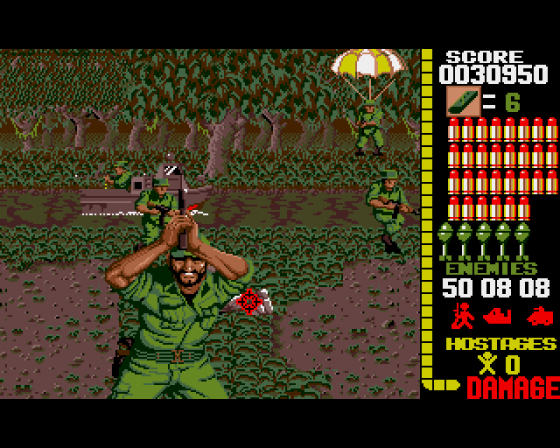 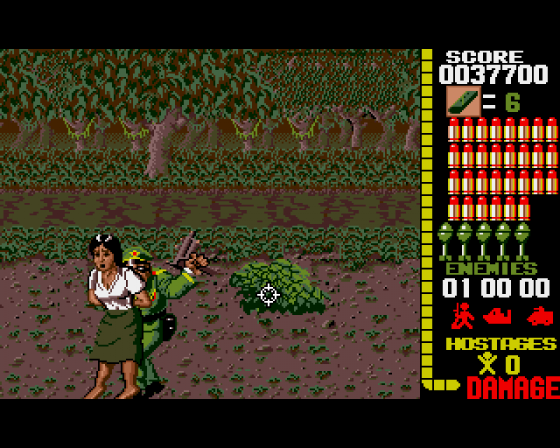