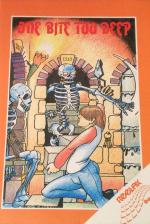 One Bite Too Deep is a multi-directional scrolling arcade adventure which is viewed rather like Sabre Wulf. You take the role of Oscar, a brave and fearless adventurer who has been given special powers to allow him to defeat the Master. The story goes that the evil influences of the Master have broken out from his tomb and are rapidly spreading. His servants have started to run riot and have acquired a taste for human blood, so you must be careful.

What you have to do is search the landscape to find the Research Station, the place where it's all happening and enter it. As you're searching for this awesome place, the servants of that evil Master are searching for you, and they tend to find you with ease. These horrendous and frighteningly horrible servants come in the form of giant vampire bats and huge floating green skulls.

If they touch you then they start sucking the blood from your body. Your blood is shown on-screen as a bar which diminishes as the blood is sucked out; needless to say that if your blood bar reaches zero you're out of gas.

You're not totally defenceless and carry a knife which is activated by pressing the fire button. If you hit one of the servants it flies away for a short period of time to recover. You also have a limited shield which gives you immunity from the blood sucking powers of the servants - this works in the same way as the blood bar and diminishes every time you use it.

Once you've got all five objects then you can complete your objective by finding the Master's tomb and bricking him in.

If you manage to solve the game then you can always try to do it again on one of the harder levels by changing the difficulty option on the title screen.

The colours used in this program have got to be amongst the most technically vile you can possibly conjure up on the C64 - they're really eyeball wrenchingly awful.

The scenery looks very amateurish and some of the buildings look like they've been drawn up by a five year old. The scrolling pretty blocky, and the animation of the characters is poor. The gameplay is very easy indeed, even on the most difficult level. A hardened gamester should be able to solve the game within a few goes!

This game would have just about passed as an average game two years ago, but now, even with its £7.95 price tag, it's just not good enough.

I just can't believe that Reelax have got the nerve to release a game as bad as One Bite Too Deep. I would have been disappointed if I had bought this game a couple of years ago at a considerably cheaper price, but now at eight quid!

Sound is virtually non-existent and the graphics are obscene - the sprites and backgrounds made me cringe and I have never seen such appalling use of colour in a computer game before. One Bite Too Deep plays just as bad as it looks and sounds, and has to rate as one of, if not the worst piece of software yet seen on the C64.

Of the three products from Reelax to enter the office this month, One Bite Too Deep is by no means the worst of the bunch, but that is no recommendation in itself.

As with their other productions, Reelax's Bite is of unbelievably awful quality. The graphics usually create the first impression of a game and Bite Too Deep's are awful.

Drunken bytes swilling around on confused and ghastly-coloured backgrounds do not particularly impress anyone, let alone me. Ignoring the optic torture and paying more attention to the gameplay, I was left wishing I hadn't. Don't buy this, it may encourage other releases of this sort.

Presentation 47%
Nice help screen and level select but nothing else.

Lastability 7%
But the game is terribly easy and lacks action.

Overall 9%
It's a shame to see software as bad as this being released in 1986.

It's a shame to see software as bad as this being released in 1986. Don't buy it, it may encourage other releases of this sort.